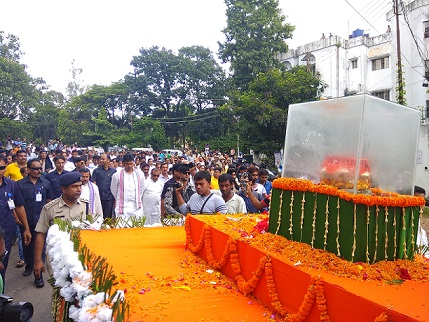 The ‘ashti kalash’ containing the ashes of the former Prime Minister Atal Bihari Vajpayee reached Tripura (from New Delhi) on Thursday with the Chief Minister (CM) Biplab Kumar Deb receiving it at the Maharaja Bir Bikram Airport in Agartala.

Hundreds of students and common people stood by the road side to pay their respect to Late Atal Bihari Vajpayee, a political doyen. A car and bike procession along with the urns reached the circuit house Gandhi statue area from where the CM, ministers, party leaders and workers walked with the ‘ashti kalash’ to the party headquarters chanting the slogan ‘Atalji Amar Rahe’.