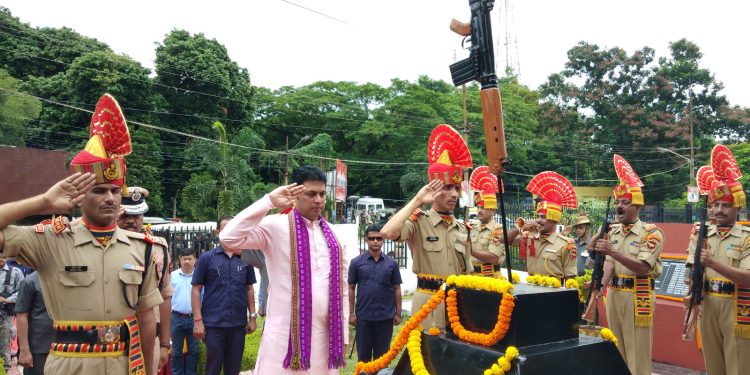 Tripura chief minister Biplab Kumar Deb on Friday paid homage to the Kargil martyrs in a programme organized by the Border Security Force (BSF) at Albert Ekka Memorial park in Agartala on the occasion of Kargil Vijay Divas.

Deb paid floral tributes and laid a wreath on the war memorial as the BSF troopers gave a gun salute to the slain soldiers of the Kargil War two decades back.

Speaking to reporters, the CM said, “India has never attacked any country first because it believes in strengthening its self-security rather than attacking others.”

“Like the Balakot airstrikes led by PM Modi four months back, a similar incident took place when Atal Bihari Vajpayee was the PM,” the CM said.

“5000 Pakistani troopers had captured Kargil at an advantageous position. Despite several hurdles, the India soldiers prove their bravery and efficiency by driving the Pakistanis away,” Deb further said.

“Within a short time, the Indian soldiers over-powered the Pakistani soldiers. However, many Indian soldiers attained martyrdom and we shall remember them throughout our lives,” the CM added.

The CM was accompanied by the troopers and officials of BSF and Assam Rifles in the programme.

Soloman Yash Kumar Minz, IG BSF said, “A complete new generation is there who do not know about the Kargil war; but those of us who have seen it know how difficult the conditions were.”

“The Indian army and the security forces fought with extreme courage and bravery. Several soldiers sacrificed their lives. On this occasion, we pay our homage to those Bravehearts,” he said.