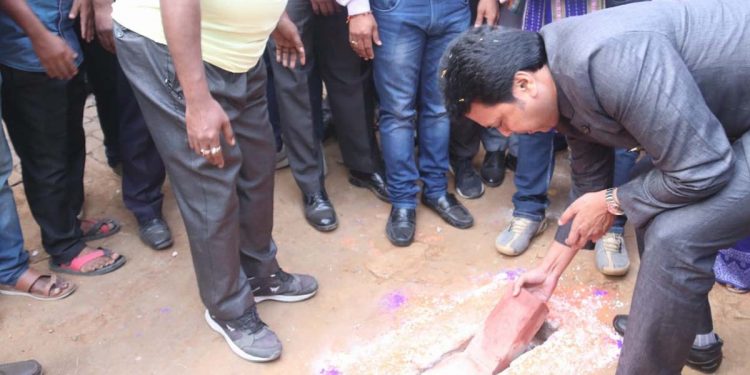 Under this project, a total of 440 brick soling roads will be constructed under MGNREGA and FFC in West Tripura district.

“A total of 127 km brick soling roads will be built in just three days with the generation of 1.50 lakh man-days under MGNREGA,” the Tripura CM said after launching the drive at Bhagalpur Gram Panchayat under Bamutia Block.

“Construction of 127 km roads and generation of 1.50 lakh man-days within just 72 hours are going to set a record in Tripura,” Tripura CM Biplab Kumar Deb said.

Speaking to media persons, the Tripura CM said many of the small villages across Tripura are yet to have road access.

Keeping this view in mind, the state government has initiated this historic drive from West Tripura and the remaining districts would also be covered under this mission, he said.

“During the tenure of the previous government, MGNREGA was mainly used politically and for luring cardholders to party rallies,” said Biplab Deb.

He added, “The villagers who were deprived of the road facility for long are now happy to have road access in front of their houses.”

“The initiative, I believe, will connect the villagers with development and send a strong message among the rural people,” Biplab Deb added.

When asked why there was no proper roads especially in the tribal-dominated ADC areas, the Tripura CM viewed, “Both the state and the ADC were ruled by the same party for a long period.”

The roads are being built under the Pradhan Mantri Grameen Sadak Yojana.

He also assured of blacktopping the roads.

“The development works which are being implemented today should have been done by the then double-engine government but they neglected it,” Deb further said.

Referring to the Bru settlement issue, Deb said, “I thank the 37 lakh people of Tripura for accepting the permanent rehabilitation of Bru people in our state.”

“The state government has made necessary arrangements for rehabilitation of around 35,000 people of nearly 4,500 families at various locations with a package of Rs. 600 crore.”

“It was possible only because of the determination and love of Prime Minister Narendra Modi and Union home minister Amit Shah,” said Biplab Deb.

The chief minister also said: “The state government has set a target of providing Ayushman Bharat e-cards to 20.56 lakh people.”

“The government has already achieved 75 per cent of its target. Besides, efforts are on to achieve 100 percent success in various flagship programmes and schemes by 31st March, next,” the Chief Minister told the gathering.

Under the Atal Jaldhara Mission, the state government will ensure free water connection to every household by December 2020, said Biplab Deb.

“Works of Rs. 8,600 crore will be implemented in Tripura under National Highway projects and already Rs. 1200 crore has been sanctioned in one year and tender has also been called,” he said.

“Under Smart City Mission, CCTVs are being installed in various locations so that the crime rate comes down. After completion of Feni Bridge project, we will have direct access to Chittagong Port in Bangladesh,” he said.