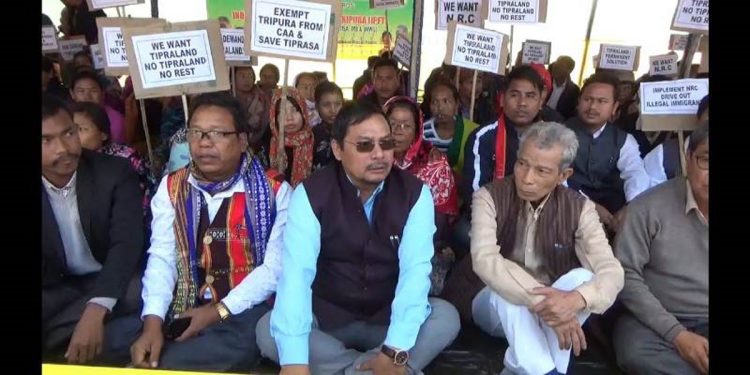 In a significant political development, the IPFT, an ally of the ruling BJP in Tripura, on Friday night forged an alliance with the newly floated tribal-based party for the upcoming tribal autonomous council elections.

IPFT president Narendra Chandra Debbarma and general secretary Mevar Kumar Jamatia, both are ministers of the BJP led government-led by Chief Minister Biplab Kumar Deb, however, said that they are still in coalition with the saffron party.

BJP spokesman Nabendu Bhattacharjee said that the IPFT did not share their decision with them.

“However, our senior leaders are discussing the latest political development,” Bhattacharjee said.

Deb Barman told reporters for the greater cause of the “Tipra land” (a territory for the tribals) they would fight together in the ensuing elections to the Tripura Tribal Areas Autonomous District Council (TTAADC), a politically important constitutional body.

Deb Barman later in the Friday evening held a closed-door meeting with Debbarma and Jamatia and other senior IPFT leaders before he announces to contest the TTAADC polls together.

The IPFT leaders said that they are still with the BJP led government and part of BJP floated regional body Northeast Democratic Alliance (NEDA).

Political circles observed that the IPFT took the decision after the BJP leaders yet to allot the majority of the seats to field party (IPFT) candidates in the TTAADC elections likely to be held before May 17.

BJP leaders are also keen to contest a majority of the 28 TTAADC seats to strengthen their political base in the tribal areas.

The BJP in alliance with IPFT won the 2018 assembly polls defeating the CPI-M-led Left Front.

In the 60-member Tripura assembly, BJP has 36 seats and the IPFT eight and CPI-M has16.