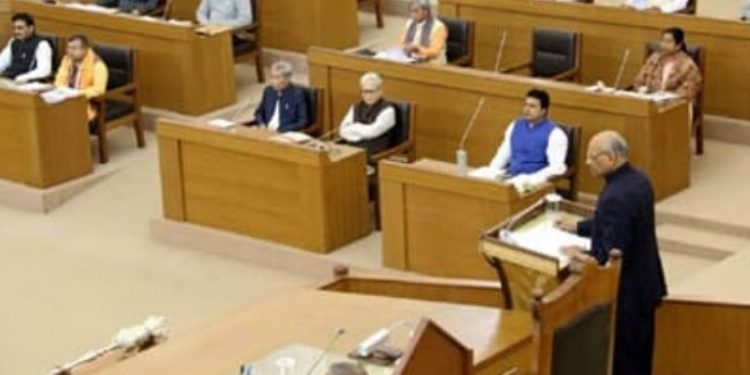 The winter session of the Tripura assembly began on a stormy note on Friday with opposition Left legislators created ruckus over the arrest of former minister Badal Chowdhury.

Minutes after governor Ramesh Bais’s customary speech on the opening day of the first session, the opposition members led by Tapan Chakraborty rushed into the well of the House to protest against the arrest of Chowdhury in a “false case”.

The proceedings of the assembly were disrupted for half an hour.

Outside the assembly, the CPI (M)’s youth wing — the DYFI– also organised a rally to protest on the same issue.

While Bhowmik was recently granted bail the Tripura High Court, Chowdhury, deputy leader of the Left group in the state assembly, is in custody since October 21.

According to law and education minister Ratan Lal Nath, the Public Works department under the Left Front government in 2008-09 had clubbed together 13 projects — five bridges, five buildings and three road projects — being implemented at a cost of Rs 638 crore on cost-plus norms.

Terming it the “biggest scam in the history of Tripura”, Nath said “Rs 168.13 crore had been siphoned off.”

Former chief minister Manik Sarkar, who is the opposition leader in the state assembly, had earlier said there was no corruption during the 35-year rule (1978-1988 and 1993-2018) of the Left parties in Tripura.

“Instead, state infrastructure and all other sectors improved in the state,” Sarkar had told the media.