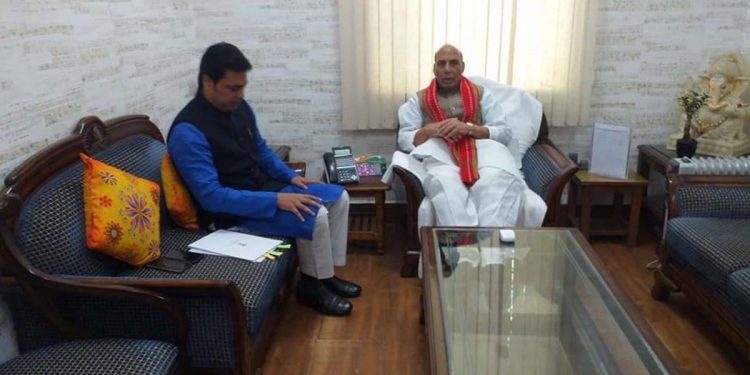 Rajnath Singh made the assurance when Biplab Kr Deb met the union defence minister in New Delhi on Tuesday and placed the demand for setting up an Army school in Tripura.

Informing about the assurance from Rajnath Singh, chief minister Deb said the Army school will be set up in Mohanpur sub-division under the West Tripura district.

The Tripura chief minister said union defence minister Rajnath Singh accepted the demand and assured him of setting up an Army school in the state.

The chief minister informed that he had a very cordial and fruitful meeting with the union minister.

In the course of discussion with the veteran party leader and union defence minister, Biplab Kr Deb also placed a demand for establishing an Army recruitment division in Tripura which was accepted by the union minister.

As the Army goes for recruitment on a regular basis every year or even in six months’ interval, the unemployed youths of Tripura having physical eligibilities will be benefitted from this programme.

A statement issued by the Chief Minister’s Office at Agartala said both the demands raised by the Tripura chief minister was accepted by the union defence minister.

“I am happy to share that Rajnath Singhji has accepted both our demands for the benefit of Tripura,” Biplab Kr Deb said in the statement.

He also offered thanks and gratitude to Rajnath Singh for accepting the demands of the state.