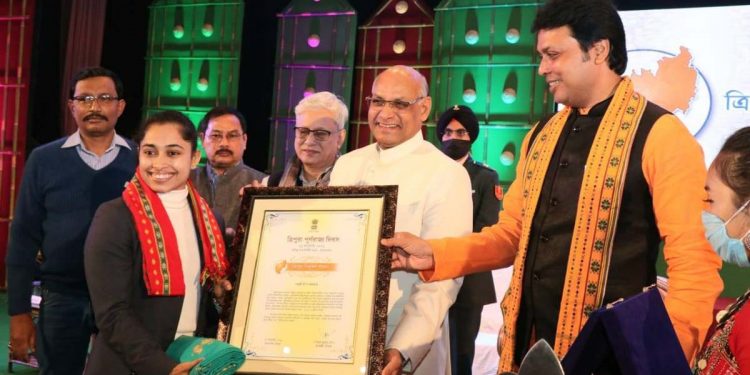 The state government has conferred the Tripura Bibhusan Award on Olympian Dipa Karmakar.

The Tripura government has honoured five eminent personalities on the occasion of the statehood day.

The statehood programme was held at Rabindra Shatabarshiki Bhavan in Agartala on Thursday evening.

This is for the first time that the state government has decided to honour eminent personalities on the occasion of the statehood day in recognition of their contribution towards the state.

In his speech, the Governor said the state has been marching ahead because of proper implementation of the central and state governments’ schemes.

While recalling the state’s journey from a princely state to a full-fledged state, Bais said, “Tripura joined the Indian Union on October 5, 1949.”

“The last king, Maharaja Bir Bikram Kishore decided to merge Tripura with Indian Union before the independence but he could not do it. His wife, Kanchan Prabha Devi put a signature on the merger agreement and completed the process,” Deb said.

In his speech, the Tripura chief minister highlighted the state government’s works for the welfare of the common people.

Chief minister Deb said, “Today is a great and historic day for Tripura.”

He said without making a statistical comparison with the previous government, it can be said the “new government is moving towards the development of all aspects of the state with a new mentality”.

“The one and only goal of the state government is to continue the welfare programmes to realise the dream of building a better Tripura,” he added.

The chief minister said the per capita income has increased in Tripura.

“The projects like SEZ, ICP and Feni bridge are coming up in Sabroom which will bring a positive impact on the state’s socio-economic condition. These projects are being developed during the last two-and-half years,” he added.