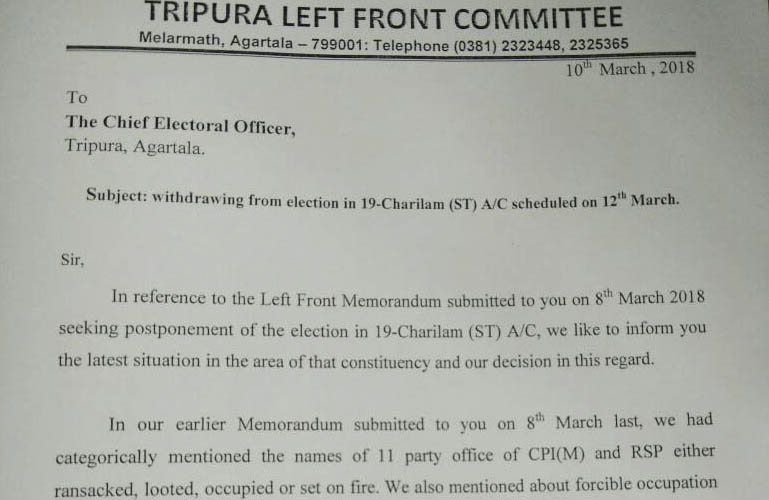 In a letter to the Chief Electoral Officer, Tripura, the Tripura Left Front Committee on Saturday stated that it has decided to withdraw their candidate from the 19-Charilam (ST) Assembly constituency election scheduled to be held on March 12, as the Election Commission of India (ECI) ‘has not considered’ its appeal for postponement of the election to the constituency due to various incidents of pre-poll violence.

In the letter to the CEO, Tripura, Bijan Dhar, Secretary, CPI(M), Tripura State Committee and Convenor, Tripura Left Front Committee, stated that on March 8, 2018, it had sought postponement of the election to the Charilam (ST) Assembly  constituency.

Alleging that several offices of the Left Front were ransacked in the constituency prior to the election, Dhar in the letter to CEO said, “In our earlier memorandum submitted to you on March 8 last, we had categorically mentioned the names of 11 party offices of CPI(M) and RSP either ransacked, looted, occupied or set on fire.”

Dhar also alleged, “We also mentioned about forcible occupation of two TMSU (Tripura Motor Shramik Union) offices in that constituency. In addition, the memorandum had a list of 58 names of CPI(M) and other Left party leaders, cadres and supporters whose houses were attacked, ransacked and looted.”

In the letter Dhar also stated that 19 Left leaders and cadres were reported to be physically assaulted in the March 8 memorandum.

Stating that in the last two days, there has been no improvement in the situation, but the situation has deteriorated, Dhar also alleged that in Madhya Brajapur, straw effigy of Left supporter Nanigopal Deb was set on fire while two rubber plantations of Kishore Debbarma and Rabindra Debbarma were allegedly gutted. Rice mill of Left supporter Surajit Das in Brajapur was set on fire, he further added.

“No party office, including the CPI(M) and RSP District Committee Offices at Bishramganj under 19-Charilam (ST) constituency area is in a position to function at present, because of those were vandalized, ransacked or gutted,” Left leader Dhar further stated.

The Tripura Left Front Committee also alleged, “All the booth offices of the CPI(M) of this constituency were demolished by the BJP miscreants. Large numbers of Left supporters were bound to stay outside due to threat perception from the BJP hoodlums.”

Dhar in the letter also alleged that huge amount of money are being extorted from the Left supporters’ families under duress. “The CPI(M) candidate though is a resident of Charilam Assembly constituency area is compelled to stay outside. He is not in a position to move in the constituency area even with security cover.”

The election campaign period was over at 4 pm on Saturday.

The letter further stated that “Any election held in such a situation that would be nothing but a one-sided exercise and we are sure, it would be a mockery in the name of democracy.”

The Tripura Left State Committee in the letter further stated, “Since our appeal for postponement of the election of 19-Charilam (ST) Assembly constituency till restoration of normalcy has not been considered by the Election Commission of India basing on the ground reality, Tripura Left Front Committee in its meeting held at 12 noon on March 10, 2018 has unanimously decided to withdraw the Left Front sponsored CPI(M) candidate from this election.”

Tripura’s erstwhile royal family’s scion Jishnu Debbarma, who was recently sworn in as the Deputy Chief Minister of the new BJP-led Tripura government, is the BJP candidate for Charilam seat.

Polling could not be conducted in the 19-Charilam Assembly constituency on February 18 after the death of the Communist Party of India-Marxist candidate.