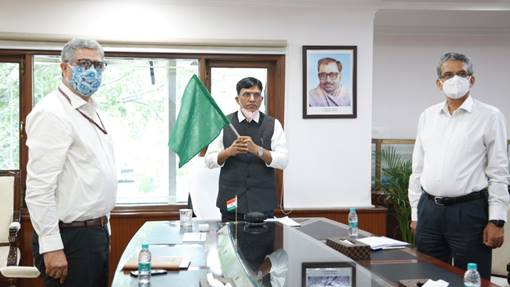 Union minister of state for shipping (I/C) Mansukh Mandaviya on Thursday flagged off the first trial container ship from Kolkata to Agartala.

Union minister of state for shipping (I/C) Mansukh Mandaviya on Thursday flagged off the first trial container ship from Kolkata to Agartala through Chattogram Port of Bangladesh.

The ship was flagged of in a virtual ceremony.

The ship has been launched under the Agreement on the use of Chattogram and Mongla Ports for the movement of India’s transit cargo through Bangladesh.

Minister Mandaviya while speaking on the occasion said that the route will open doors of new opportunities for both the countries.

“It will provide the alternative and shorter route to connect the North East Region through Bangladesh,” he said.

Mandaviya said that this is a historic move to utilize Chattogram and Mongla Port for movement of India’s transit cargo.

It will be a new chapter in India-Bangladesh maritime relations, he added.

After reaching Chattogram, the consignment will move to Agartala on Bangladeshi trucks.

The trial runs highlight the efforts that both sides have undertaken to strengthen the connectivity between Bangladesh and the North Eastern states of India.

It will cut distance and time taken in the transportation of goods for India and is a win-win for both the economies.

Bangladeshi vessels and trucks will be utilized to move the Indian cargo.