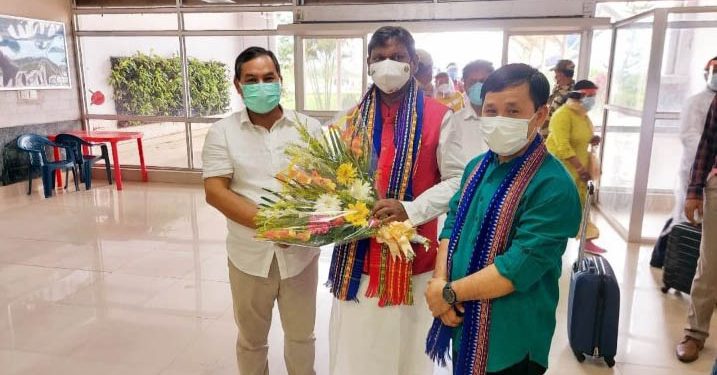 With an aim to come back in Tripura in 2023 Assembly polls, union ministers of BJP-led Modi government started visiting the state and meet the common masses, especially from the Schedule Caste (SC) and Schedule Tribe (ST) communities.

The Assembly election in Tripura is about 20 months away.

Tripura’s coalition government, led by BJP, came to power in March, 2018 after defeating the Left Front which ruled the state for 25 years.

In BJP-led government’s formation in Tripura, the voters from the ST and SC communities played a vital rule.

“The union ministers and BJP’s central leadership have been instructed to start preparing a roadmap for 2023 general Assembly election in the Northeastern states, especially Tripura,” sources said.

Union minister of state Arjun Ram Meghwal, who arrived in Tripura on Sunday, paid a visit to the house of Satya Ram Reang, who was conferred the Padma Shri award last year.

He also held meetings with the leaders of the Marwari community at Agartala and discussed several issues.

On Monday, Union minister Meghwal visited the resident of Tanuj Saha, office-bearer of the All India Safai Mazdoor Sangh and had a detailed dialogue about the various problems of the sanitation workers and their solutions.

During a courtesy call on Monday afternoon, Meghwal held a discussion with Kalyani Roy, chief whip of the BJP at the state guest house and held talks related to development-oriented schemes to enrich the organizational and cultural heritage.

Meanwhile, Union cabinet minister for tribal affairs Arjun Munda, who also arrived in Tripura on Monday, reviewed all the schemes for the welfare of the indigenous people at the State Guest House in Agartala.

While accepting a proposal from the state government, he said the Centre will provide all possible assistance for the welfare of the tribes in the state.

He claimed the central government has come up with an ambitious plan for the indigenous people.

The plan has been made centering the villages. Not only this, the target for completion of the scheme has also been set.

He said the financial, social and regional balance of the tribes will be properly maintained according to the plan of the central government.

“The role of the Tripura government towards that goal is quite satisfactory,” he added.

In this centre, high-quality forest products are being produced by Self Help Groups (SHGs) of the indigenous communities.

He also inspected Eklavya Model Residential School in Killa block of the Gomati district of Tripura.

Recently, a new Governor has been appointed for Tripura.