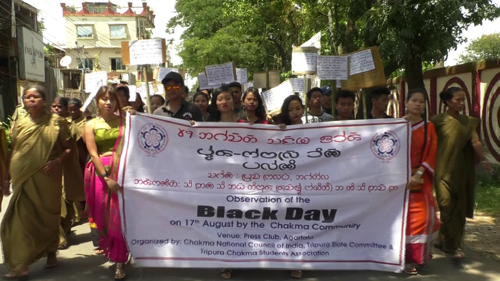 The Chakma population in Tripura observe Friday as a ‘black day’ to oppose the inclusion of their homeland in the Chittagong Hill Tracts (CHT) in undivided Pakistan (present Bangladesh) during Partition.

Aniruddha Chakma one of the protester said, “In 1947 India and Pakistan became independent and according to the Partition formula majority Hindu area were to be in India and Muslim dominated areas in Pakistan. At that time the Chittagong Hill Track has 97.5 percent Buddhist and Hindus majority area, but Cyril Radcliffe had illegally recommended CHT merged with East Pakistan on the ground that if the area is included with India then the economy will break down as it has no connection with that land. Actually, that logic is totally wrong. At present in that region, the Chakmas are identity-less, homeless and facing lot of problems so we are raising our voice against the injustice in the humanitarian ground and reconsider the CHT matter for the merger with India.”

He said that the Chakma and other tribals of CHT have been orphaned by Partition as first the Pakistani government and then the military dictators of Bangladesh reduced them to a minority by sponsoring demographic invasion.

Aniruddha viewed that the boundary commission, led by British barrister Cyril Radcliffe, had not taken into account the demographic realities.

He alleged that the scattering of Chakma tribal people to various parts of northeast India was a direct result of the forcible occupation.

Meantime, Uday Jyoti Chakma, president of Chakma National Council of India’s Tripura chapter said, “We are observing the black day for not only the Chakma people but all those who have been affected due Partition like the Punjabis and Sindh, there were many Hindus in the Pakistani and Bangladesh side borders. So we are raising our voice to bring attention on how Partition affected majority people in the bordering sides and the Chakmas have been one of the most affected people.

He said on August 17, in 1947, when the rest of India had been celebrating the new-found independence, the Baloch regiment of the Pakistani army had invaded the Chittagong Hill Tracts and pulled down the Indian flag raised atop the Chakma king’s royal palace in Rangamati.