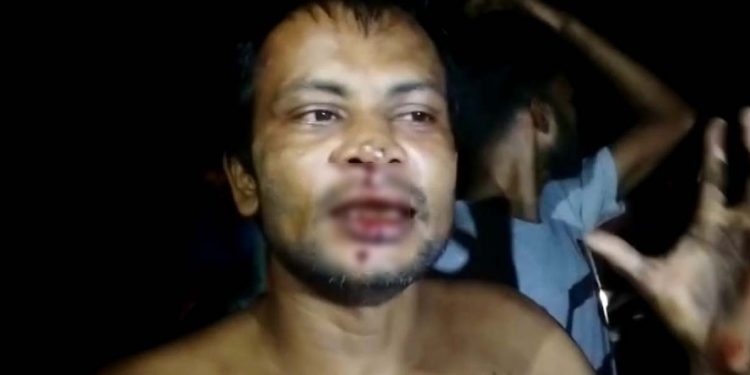 One of the victims. Image credit - Northeast Now

Sensation prevails after an attack on the religious minority-dominated areas along the Indo-Bangla border near Agartala, allegedly by members from the saffron brigade on Friday night.

The people, who were injured in the attack, alleged that the attackers were associated with the Rashtriya Swayamsevak Sangh (RSS) and Vishwa Hindu Parishad (VHP).

The clashes took place in the Joynagar, Joypur, and Rajnagar areas near the Indo-Bangladesh border, a day ahead of the Eid-ul-Zuha.

These areas are very close to Agartala town.

Many of the people were injured in the attacks and counter-attacks.

On being informed about the incident, a team of police personnel rushed to the spot.

Security personnel have been deployed in the areas after the clashes.

Some of the minority people were seen bleeding after the severe attacks and their cows were allegedly snatched away from their homes.

Surprisingly, nobody has been arrested in connection with the incident so far.

The house of Dulal Mia and two others in Ramnagar in Agartala were attacked by the miscreants.

According to sources, three were injured seriously while Dulal Mia was hospitalized.

Earlier, it was reported that on Friday afternoon, the Vishwa Hindu Parishad (VHP) and Bajrang Dal asked the Tripura Police to take steps so that cows are not slaughtered on the occasion of Eid-ul-Zuha.

The Communist Party of India-Marxist (CPI-M) and the Tripura Congress have condemned the attack in the minority areas ahead of the Eid-ul-Zuha.

The attack ahead of the Eid-ul-Zuha festival sparked tension in the Indo-Bangla border areas.