Tripura: 3 members of a family held with gold worth Rs 1 cr 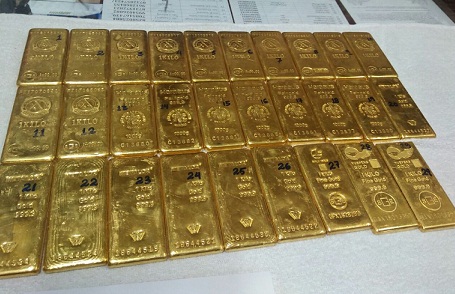 Three members of a family were nabbed by BSF on Wednesday from Jaynagar on outskirts of Agartala for their alleged involvement in gold smuggling valued around Rs one crore from Bangladesh.

Acting on a tip-off, BSF jawans led by senior officials apprehend one Jahangir Hossain, 54, his wife and son while they were clandestinely acquiring 2.276 kg gold worth of Rs 96 lakh from the Bangladeshi smugglers.

“The Indian smuggler Jahangir, while doing the illegal trade was assisted by his wife and young son. The three were detained at the spot bordering Jaynagar (on the outskirts of the state capital here),” BSF DIG C.L. Belwa said.

He said that Customs officials were informed who later reached the border village.

The gold was handed over to the Customs Department for completing their formalities.

On January 3, the BSF and the Directorate of Revenue Intelligence had seized around 1,68,500 Yaba tablets (drugs) worth of Rs 8.53 crore destined for Bangladesh from a house in a border village called Matinagar-Rayermura under the Sepahijala district in western Tripura.