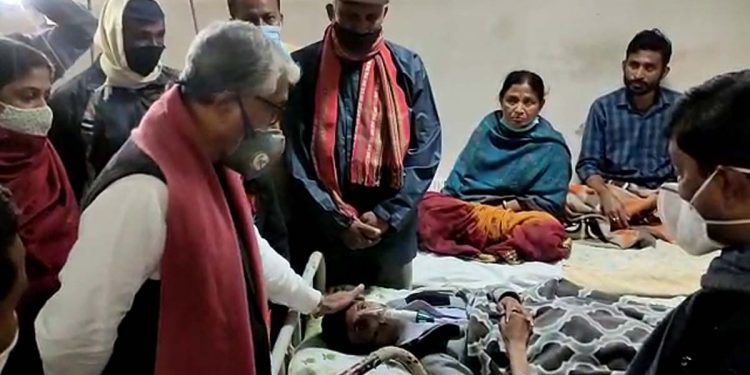 Restrictions under Section 144 have been extended for two more days in Agartala while at least 88 people including teachers and police personnel were injured when the sacked teachers were forcibly removed from the agitating site.

This has been confirmed by the district magistrate of West Tripura district, Shailesh Kumar Yadav while addressing a press conference on Wednesday evening.

Talking to reporters, Yadav informed that a total of 165 people were arrested from the ‘dharna’ site at Paradise Chaumuhani on Wednesday morning.

Later, 38 people were arrested while they were protesting in front of the Tripura chief minister’s residence.

The district magistrate admitted that the police used water cannons, tear gas shells and baton-charge to disperse the protesting teachers.

Yadav claimed several policemen were injured in the police-protestors’ clash.

“The injured teachers were taken to the hospital for treatment,” he said.

He alleged, “The agitating teachers also damaged four-wheeler vehicles belonging to the police and pelted stones at the security force personnel.”

Meanwhile, the sacked teachers, arrested from Dharna Mancha in the morning, were taken to RK Nagar TSR camp where they observed hunger strike.

Food was provided by the government in the camp, which the teachers refused to take.

They said they would not touch any food provided by the government.

They were later released in the evening.

One of the teachers fell ill and she was admitted to the IGM Hospital in Agartala.

Piyali Chowdhury, a sacked teacher, said 12 of the agitating teachers were hospitalized.

“In all, more than 70 of the agitating teachers were injured. But due to pressure from the government, the hospital authorities compelled many of them to leave the hospital,” she said.

After coming out of the hospital, Sarkar told reporters, “There was no need to beat the teachers.”

“The government could have solved the problem by talking to them,” he added.

He strongly criticized the role of the state government.

The incident of assault on the sacked teachers has also been condemned by Congress.

More than 10,000 sacked teachers of Tripura started a movement from December 7 last demanding their jobs back.

The administration and police on Wednesday forcibly removed them from their agitation site in Agartala.