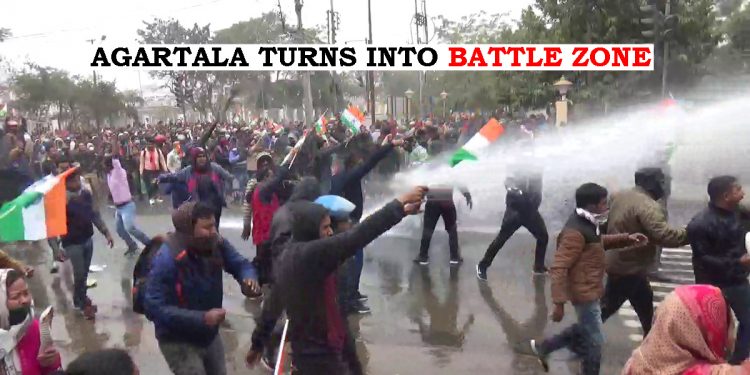 Tripura Police has resorted to lathi-charge, firing of tear gas shells and water cannons on agitating terminated teachers in Agartala.

The clash between the police and agitating teachers has been reported from outside the Tripura Chief Minister Biplab Deb’s residence in Agartala.

Carrying the Tricolour, the protestors are braving the water cannons and tear gas shells fired by the personnel of Tripura Police in its bid to disperse the agitating crowd.

Earlier on Wednesday morning, a massive force of police and paramilitary personnel had vacated the location at Paradise Chowmuhani in Agartala, where the protestors had been demonstrating for the past 52 days.

Over 160 agitating teachers were also arrested by the police earlier in the day.

The police action on the peaceful protest by the terminated teachers triggered the clash between the police and protestors outside the Chief Minister’s residence.

At least 24 protestors have sustained injuries in the clash.

Notably, families of the agitating teachers, including children are present at the protest site outside the Chief Minister’s residence.