Das alleged attacks on the CPI-M party offices, homes and business establishments, which had started after the BJP came to power in Tripura, continued unabated 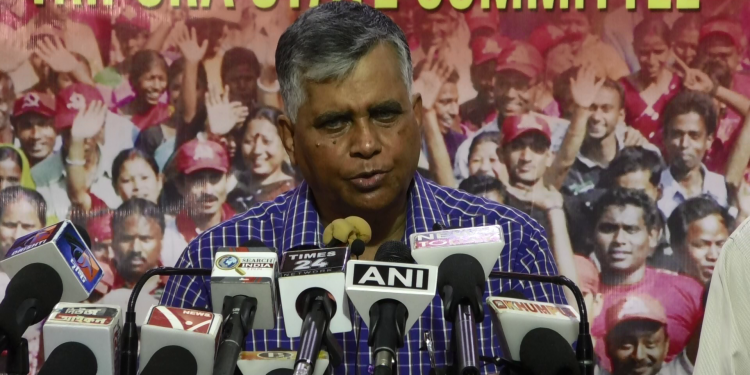 The CPI-M in Tripura would begin a 48-day long door-to-door campaign against the NRC and NPR in the state.

The party would begin the campaign from February 4.

CPI-M state secretary Gautam Das on Sunday said the 48-day long campaign against the NRC and NPR would culminate on March 23.

“At least 12 times within and outside the Parliament (Home Minister) Amit Shah announced to introduce NRC in the entire country, now the Prime Minister said they never said anything like this.

“As part of our nation-wide move, we would ask the people not to fall in the mischievous trap of the RSS and Modi-Amit Shah conspiracy to make the genuine Indian a doubtful citizen,” Das told reporters in Agartala.

He said the RSS is keen to drive out Muslims and Christians from the country and they are also ideologically against Dalits, scheduled caste and scheduled tribe communities.

“As they follow ‘Manusmriti’ (Manu’s code on social practice), RSS’s main motto is to split people on religious and ethnic lines,” Das said.

He said after the BJP government came to power in Tripura in March 2018, a total lawlessness prevailed in the state.

Das alleged attacks on the CPI-M party offices, homes and business establishments, which had started after the BJP came to power in Tripura, continued unabated.

“Police remained a silent spectator and averse to register FIR of the crime. To divert people’s mind over the complete non-performance of the BJP government, police had arrested former minister Badal Choudhury,” said the CPI-M leader.

He was arrested without any proof, evidence and basis and it was done only to harass him and to malign the previous Left government, Das alleged.

The High Court on Saturday granted bail to Choudhury as the police failed to submit chargesheets against Choudhury.