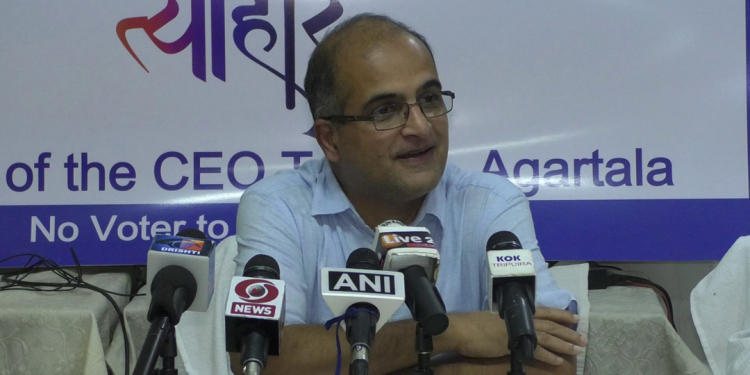 During the re-polling at 168 polling stations in the Tripura West Lok Sabha constituency, the state recorded 72.32 per cent voter turnout till 5 pm.

Talking to media persons, Tripura CEO Kanti informed that voting started at 7 am in the morning on Sunday under tight security and even after 5 pm, voting continued at few locations.

However, according to the CEO, there has been no report of any violence or EVM malfunctioning and everything was peaceful.

Meanwhile, opposition Communist Party of India-Marxist (CPI-M) and the Indian National Congress (INC) alleged that their party members were regularly threatened by the ruling BJP workers and supporters.

The CPI(M) and the Congress also alleged that their party workers and supporters were allegedly asked by BJP workers not to come out to cast their votes.

However, it is expected that the re-polling percentage would become more than 90 per cent.

Earlier, the Election Commission of India (ECI) on Tuesday ordered re-polling in 168 polling stations of 26 Assembly constituencies under the Tripura (West) constituency.

The ECI ordered re-polling on the basis of allegations brought by opposition parties which alleged that massive irregularities took place during voting in Tripura West parliamentary constituency which went to polls on April 11, 2019.

A report was submitted by the Tripura CEO on the basis of scrutiny of visuals of CCTV cameras installed at the polling stations.

This prompted the ECI to order re-polling in 168 polling stations of 26 Assembly constituencies under the Tripura West constituency.

On April 11, the Tripura West parliamentary constituency had recorded around 85 per cent voter turnout.