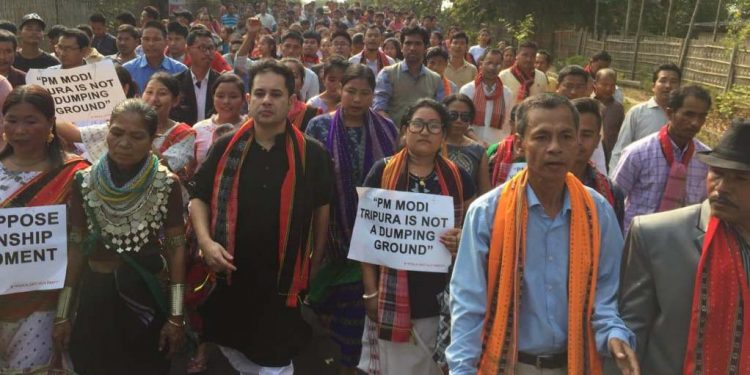 Debbarma launched an attack against the BJP over Citizenship (Amendment) Bill, 2018 saying the legislation is a “jumla”.

The royal scion also threatened that if the National Democratic Alliance (NDA) government tries to pass the Bill in Rajya Sabha or enforce it through an ordinance, it will have consequences of massive protest, say media reports.

Uploading a few images of the rally on his Twitter handle after the rally, Debbarma, said: “Walked the entire stretch of about 5-6 km and also gave the compensation to the victims of the ambulance attack and Sumit Debbarma, who was shot in the chest by the TSR.”

The protest rally was taken out in the afternoon at Baijalbari in Khowai district, 55 km from Agartala.

It may be mentioned that at least five persons were injured, with two sustaining bullet injuries, during a clash between policemen and North East Students’ Organization (NESO) supporters at Khumulwng, headquarters of the Tripura Tribal Areas Autonomous District Council (TTAADC), nearly 25 Km from Agartala, recently.

The injured activists staged protest against the Citizenship (Amendment) Bill, 2016.

Debbarma, who is also the working president of the Tripura Pradesh Congress Committee (TPCC), ahead of the rally, appealed to the people to join the rally.

He had tweeted: “Protest rally at Baijal Bari, Khowai against Citizenship Amendment Bill. To all who are close by and would like to attend pls come. This is about our existence i (sic) don’t care who you vote for, this rally is not for votes but to protect our state and country.”

Some glimpses from the Anti Citizenship Amendent bill rally today at BaijalBari . Walked the entire stretch of about 5-6 km and also gave the compensation to the victims of the ambulance attack and Sumit Debbarma who was shot in the chest by the TSR . pic.twitter.com/uj8e6N6jmc

The protestors shouted slogans against the Citizenship Bill holding placards which read as ‘PM Modi, Tripura is not a dumping ground’, ‘We oppose Citizenship Amendment Bill’.

The Bill, which was passed in Lok Sabha on January 8, 2019, is yet to get Rajya Sabha nod. The BJP-led NDA government is likely to introduce the Bill in the next session starting from January 31.

A media report quoted Pradyot as saying: “If they try to pass it in the Rajya Sabha or enforce it with an ordinance, we shall show them that we might be a small state but we are less than no one else. People of Tripura would stand with “the country” against politics.”

The Tripura United Indigenous People’s Council (TUIPC), a joint body of 48 organisations, including former insurgent groups, organised the protest rally as a part of the series of agitations against the Citizenship (Amendment) Bill, 2016.

Royal scion Debbarma appealed to the people of the state to rise against the legislation.

He also reportedly said the BJP’s own ally Shiv Sena is speaking against the Bill and West Bengal chief minister Mamata Banerjee has been protesting in her state.

He also reportedly said, “Janata Dal (United), Asom Gana Parishad (AGP) and political parties in Meghalaya, Nagaland, Mizoram are against the Bill. We in Tripura are against it too. Our vote will only go to the party which will repeal the citizenship bill.”