46 drums of ganja recovered at Kalamchora in Sepahijala district and the investigation is still on, says police official 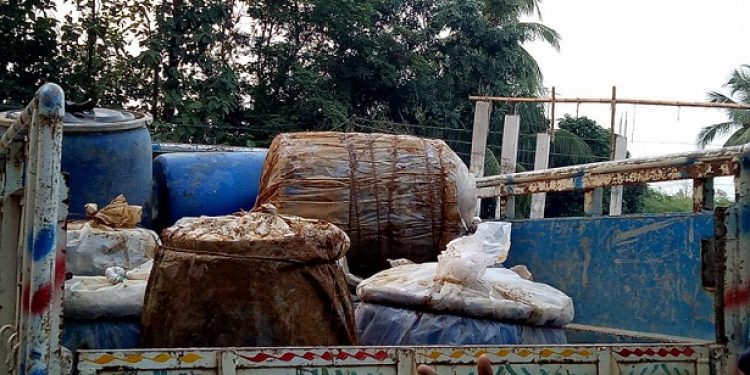 A view of the drums of ganja recovered by Tripura Police. Image - Northeast Now

As part of their anti-drugs operations, the Tripura Police along with Tripura State Rifles recovered 1643 kg of dry ganja worth Rs 82 lakh hidden underground in houses as well as in a jungle bordering Kalamchora in Sepahijala district of Tripura.

The operation was started on Saturday afternoon and after a 24-hour-long operation, the police during a massive hunt could locate the ganja kept in 46 plastic barrels and several packets and sacks under the floors of houses and in the jungle area of Kapalitill.

Sub-Divisional Police Officer (SDPO) Sonamura Rajdeep Deb, who led the operation, said, “It was a 24-hour-long operation in the terrain which was very difficult and different. It was only possible due to the cooperation of all. The altitude is higher and finding out the barrels was a herculean task. A total of 46 drums have been recovered and the investigation is still on.”

He added that it was a joint operation of the police consisting of various police stations – Amtali, Srinagar and Kalamchora and the 7th battalion TSR.

On the basis of specific information, they started massive search operation manually and also with the help of JCB for digging and recovered around 1643 kg of dry ganja with a market price around Rs 82 lakh.

“This is one of the biggest recoveries and we shall continue our anti-ganja drive,” said police official Deb.

In a period of around eight months after the new BJP-IPFT Government came to power under the leadership of Chief Minister Biplab Kumar Deb, the Tripura Police and other security forces recovered around 60,000 kilograms of dry marijuana besides other drugs and contraband.