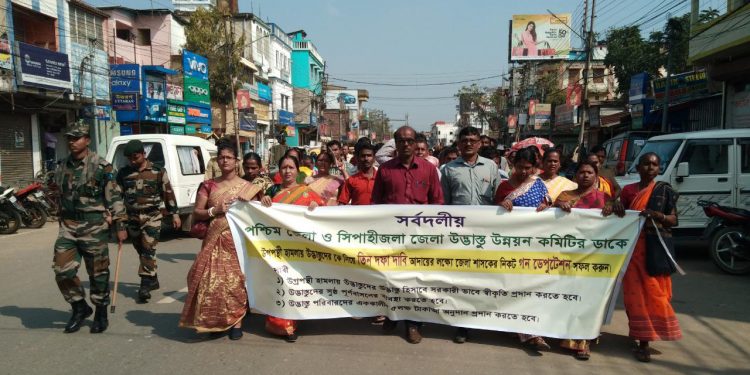 A procession taken out by members of West and Sepahijala District Development Committee of Displaced People. Image - Northeast Now

Hundreds of non-tribal internally displaced people, all insurgency affected, from two districts of Tripura took part in a procession here demanding their recognition by the government with proper rehabilitation and compensation.

Most of the participants originally hailing from various internal remote areas of West Tripura and Sepahijala districts and have been displaced in between 1996 and 2000 when the tribal insurgency was on its peak in Tripura.

The procession was organized under the banner of West and Sepahijala District Development Committee of Displaced People.

Majority of the protesters were women and they sought status recognition as ‘Internally Displaced Persons’ (IDP) for 6500 families, who were rendered homeless due to an armed tribal insurgency in the last two decades.

They also demanded rehabilitation with cash compensation of Rs 5 lakh per family.

Between 1996 and 2000, most of these people have been displaced due to militancy and during the last 19 to 20 years they have been living in temporary camps in the two districts.

Gopal Laskar, president of West and Sepahijala District Development Committee of Displaced People said, “We have remained homeless for the last twenty years due to militancy and now our first demand is recognition from the government as militancy victims. Our second demand is rehabilitation and thirdly Rs five lakh compensation for the militant affected families.”

He added: “During the previous CPI-M government, we were displaced due to insurgency and during that time also, we had agitated on our demands but nothing happened. Now, we are appealing with our demands to the new state government. Around 6500 families of West and Sepahijala are here with us.”

Thousands of the non-tribal section of people in Tripura during the period from 1996 to 2000 were compelled to evacuate for safer places as they were the main target of the tribal militants who claimed to have fought for an independent Tripura.

Earlier, there were similar rallies in demand of government rehabilitation of the militancy-affected displaced people but till now there has been no move from the administration part.