Tripura CM appeals investors to set up industries in State 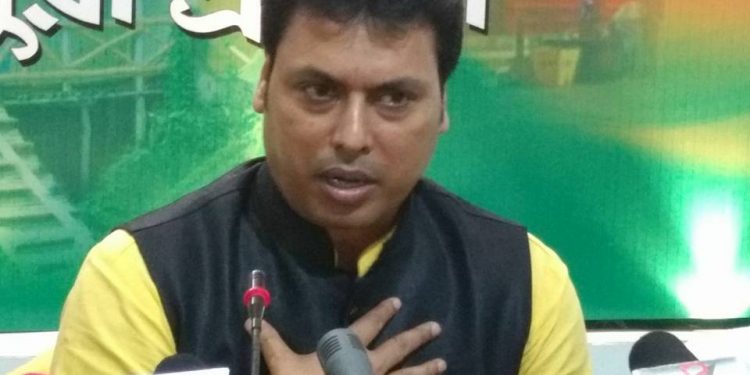 Tripura chief minister Biplab Kumar Deb on Tuesday appealed to the investors to set up industries in the State.

He assured that the State Government will extend every possible helping hand for them.

On Tuesday evening Deb was addressing a press conference at state secretariat.

“At present the CD ration in Tripura is 56. But just 17 months back when we came to the government it was only 39,” he said.

Biplab Deb said, “My government is always encouraging people for self employment.”

“And youths of the State are coming forward to set up their business in the State,” he added.

“Banks are also giving them loans. That’s why in last 17 months the CD ratio has grown up to 39 to 56,” Deb further said.

Biplab Deb said, “In Maharastra and Gujarat, CD ratio of banks is 200, which is higher than the national average.”

“We are trying to reach national average of 78 in CD ratio within very short time,” he added.

The chief minister was delighted when telling that more than 4, 37,000 job creators have come up in Tripura, who have started or planning to start their own business.

They can now give job to the other people, he said.

They are taking loans from the different banks of state, he added.

“Banks have sanctioned 50 crores to 20 thousand rupees loans in Tripura,” he also said.

In the press conference Biplab Deb said, now people can understand the government cannot give government job but can give employment.

He said, a SEZ will come at Sabroom within very short time.

Small scale steel industry can set up there.

The chief minsiter appealed to the investors to come forward to set up industries in Tripura using the state help.

He also said that, the State Government is trying to develop the business relation between Bangladesh.

In the press conference, the chief minister supported economic reforms of central government.

He also batted for union finance minister Nirmala Sitharaman’s step to slashing corporate tax and followed by the biggest market rally in a decade.

He said, “What steps had been taken by the Central Government will strengthen the Indian economy.”