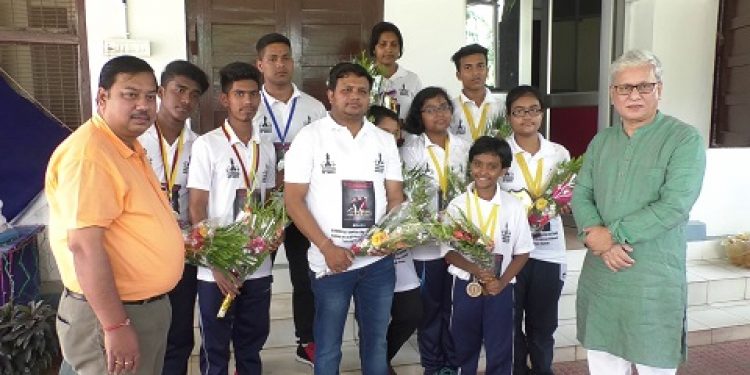 The eight member’s team had returned home with 15 laurels including 11 gold, two silver and two bronze in two categories.

On returning home the team was given a floral welcome at the MBB airport at Agartala and also felicitated by the Deputy Chief Minister Jishnu Dev Barma in presence of the President of the Tripura Chessboxing Association Ramprashad Paul who also is a Member of the Tripura Legislative Assembly.

With the success the team members and its coach have expressed a bright future of the game in the state and of producing champions as in the recently held competition two of its members have been selected as national champions male and female of the junior category.

The deputy chief minister also expressed that in the line of the Prime Minister Narendra Modi, the new government of Tripura under the leadership of the young chief minister Biplab Kumar Deb is trying promote sports to make the state healthier and discipline through sports and physical activities.

Chess boxing is a hybrid that combines two traditional pastimes: chess, a cerebral board game, and boxing, a physical sport and was invented by Dutch performance artist Iepe Rubingh in 1992.

Chess boxing was introduced in India in the year 2011 and the 7th Indian National Chessboxing Championship was held at Agartala last year.