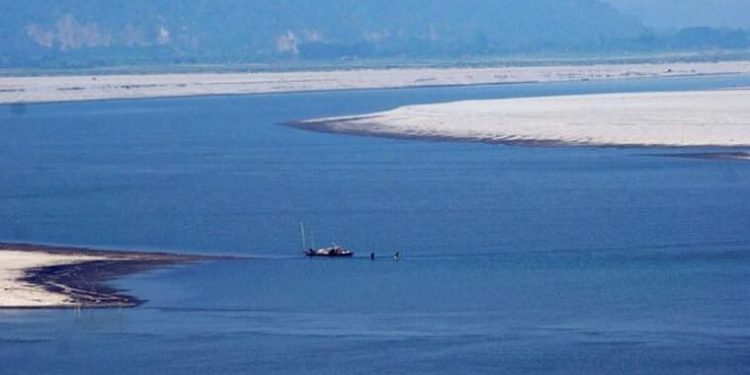 The focus in this write-up will be confined to the portion of the Brahmaputra river flowing through the Brahmaputra valley in Assam from Kobo (the trijunction of Lohit, Dibang and Dihang rivers near Jonai) to Dhubri. Out of the total basin area 5, 80,000 sq km, the catchment area relevant to Brahmaputra river for the portion described above is 5, 13,000 sq km as the catchment of Sikkim (7300 sq km), West Bengal (12585 sq km) and Bangladesh (47000sq km) joins the river at downstream.

The Brahmaputra river system is one of the most complexes in the world. Out of this 5, 13,000 sq km, 57% of the catchment fall in the high altitude Tibet region of China. This region is devoid of adequate plant coverage, has an extremely dry & cold climate, is subjected to huge soil erosion due to frost action and glacial movement; therefore, contribute huge quantities of sediments to the river. The precipitation in this region is mostly in the form of snowfall that melts with the advent of summer, swelling the river in the downstream. These features of this area are responsible for some of the unique characters of the river.

Out of the 1,75,000 sq km of Brahmaputra basin in India (leaving aside Sikkim and Bengal areas), 81,000 sq km lies in the state of Arunachal Pradesh and 45,000 sq km in Bhutan. This entire area constituting about 25% of the basin is mostly within the Himalayan ranges. The area is thickly forested, ecologically very fragile, receives very high rainfall and contributes most of the flow of the river. Therefore, together with the Tibet area, 82% of the river basin is in the young Himalayas making it predominantly a Himalayan river by nature.

The catchment in India and Bhutan receives very high-intensity pre-monsoon and monsoon rainfall. It synchronizes with snowmelts from the Tibet catchment causing floods in the valley. It is to be noted that the monsoon flow in the river is generally 10 times of the lean period flow. It is interesting to note that the ratio of maximum observed  discharge (72794 m3/sec)to that of minimum observed discharge (1757 m3/sec) at Pandu is of the order of 41 times indicating dynamic nature of the Brahmaputra flow.

The highest silt load observed at Pandu (Guwahati) is 366 MCM per year.  The Dihang (the main stem of Brahmaputra), Lohit, Subansiri, and Dibang are the rivers that contribute maximum sediment loads to the Brahmaputra. The river carries high discharge, over 80% of the annual flow, during the monsoon months from May to September. Also, over 95% of the annual sediment load is carried by the river during this period.

The width of the Brahmaputra river varies from 1.2 km to 22 km and therefore, conditions of flow are not uniform.  The river is highly braided i.e. multichannel with intermediate sand bars and islands in most part of its 640 km length. The channels also keep shifting and the sand bars keep changing locations. This process of shifting of the river has been the nature of the river from ages. As per a recent study conducted by North East Space Application Centre (NESAC), the Brahmaputra river itself along with its islands and sandbars occupy 6700 sq km (about 14%) of the valley. The study also reveals that there are 6000 stable islands (more than 30 years existence) which occupies about 30% of this riverine area.

The river is joined by large numbers of tributaries from the north as well as from south–all originating in hills. The northern catchment being much larger, the tributaries are larger. Added to this fact, their catchment lies in the young and unstable Himalayas and contributes about 5 times more sediment for an equal area from more stable Patkai, Mikir Hills and Meghalaya in the south. Therefore, these northern tributaries carry many times more sediment than their counterparts and deposit a large portion of it at their outfalls with the Brahmaputra pushing it towards the south. As a result, the river, in general, has a tendency to shift southward.

Evidence of large shifts during the recent past also exists. For instance, the Brahmaputra, which was flowing along the Kherkutia Suti has shifted to the present course along the south of Majuli Island after 17th Century A.D. In this context, it is also observed that the southern tributaries have a tendency to move almost parallel to the Brahmaputra towards their tail end before their outfalls due to prevailing topographic conditions.

The Brahmaputra has no distinct or firm banks in almost its entire length and appears to have the freedom to avulse its banks at almost any location except for a few stretches where the width of the river is constricted. As many as 9 such constrictions, called nodes are in existence in the valley. In upper Assam, these nodes are due to the existence of more resistant soil whereas, in lower Assam, such nodes are due to rock intrusion of Garo-Khasi massif.

The entire Brahmaputra basin is highly seismic with large earthquakes that have been recorded in the recent past. According to the plate tectonic concept, the Indian plate moving in the north–north-easterly direction is pushing the Eurasian plate and is causing deformation and instability in Brahmaputra valley. This causes the rise of the Himalayas and is the reason behind the seismic events in the Brahmaputra basin.

Between 1920 and 1980, as many as 455 earthquakes of magnitude higher than five on the Richter scale were recorded in the region of which three were above a magnitude of eight. However, the earthquake that occurred on the 15th of August 1950 with a magnitude of 8.6 in Richter scale was the most disastrous and had a profound impact on the Brahmaputra river. The epicentre of the earthquake was in Tibet and about 50 km from the north-eastern border of India. It caused widespread devastation in Mishmi and Adi (Abor) Hills of Arunachal Pradesh up to the Ranganadi river towards the west in the form of landslips. The shocks of the earthquake were so severe that it stripped 40% or more of the hill faces in some areas such as Denning and Demwe valleys. Many natural dams were formed on the sub-tributaries as well as on main tributaries of Subansiri, Lohit and Dibang due to huge landslips.

Later, these were all breached and debris carried down as bed load and as sediment. Due to this, the rise of bed level up to 20 ft was observed in the valley immediately and downstream of the foothills in Lohit, Dibang, Dihang, and Subansiri rivers. Bed level of Brahmaputra rose by 8-10 ft at Kobo and 5-6 ft at Dibrugarh. Excess silt continued from the hills for a decade and the rise in the Brahmaputra river bed continued till around the year 1986 in the downstream causing widespread changes in the river morphology.

It is not that the 1950 earthquake was an isolated case. In fact, such earthquakes have been quite common in the Brahmaputra basin in the past. As recently as 1897, there was a huge earthquake of even more devastating nature in the Shillong plateau. Smaller earthquakes that are quite common also cause instability by disturbing the hill slopes resulting in the release of an increased quantity of sediments.

In fact, had the North-eastern region of India not been seismic, the Brahmaputra would have settled down to a regime which would have coped with the sediment that got into it on a regular basis. But for the existence of this factor, huge sediment loads are injected into the river in an unpredictable and non-uniform manner making it a very unstable and highly dynamic river.

Dhruba Jyoti Borgohain is a retired Chief Engineer of the Brahmaputra Board. He can be reached at –[email protected]