Investigation into the case of plot to kill a politician seems to have revealed something else: Kikon 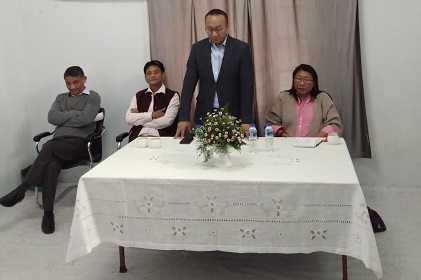 The alleged plot to kill a politician in Nagaland took a new turn with a ruling BJP legislator in Nagaland saying that the politician targeted has no Nagaland connection.

“There is confirmation from a top cop of Nagaland that the sensational supari has no Nagaland connection! The investigation seems to have revealed something else!” Kikon tweeted.

A team of Nagaland police led an officer in the rank of inspector general of police (IGP) left for New Delhi on Sunday to coordinate with the Delhi police for joint interrogation and investigation into the matter.

The murder plot came to light when hitman Vijay Farmana was arrested in Lucknow by Delhi police on May 17.

Farmana, who was arrested along with his two alleged accomplices Sharad Pandey and Kapil Chintania, was allegedly paid Rs 80 lakh and a luxury car (Ford Endeavour) in April to kill a Nagaland politician after the Lok Sabha elections.

Farmana was wanted in 11 cases of murder, one rape, an attempt to murder case and several cases of carjacking carried a bounty of Rs 50,000 on his head.

According to reports, Nagaland director general of police T.J. Longkumer denied having received any report from the state police team which was detailed to coordinate with the Delhi police in the case.

Longkumer said he was awaiting an official report from the IGP, who is in Delhi conducting a joint interrogation.

He said investigation will be carried out based on the interrogation and that it was too early to divulge, comment or draw any conclusion with regard to the case.

He said the investigation was going on and leaking information in connection with the case at this point could hamper the process.

Various Naga organisations, including the Naga Hoho, Nagaland Tribes Council, Naga Students’ Federation and Nagaland PCC, expressed shock over the plot to kill a politician of the state and hiring of the “contract killer” for the purpose.

They have demanded through investigation into the case and unearth the masterminds behind the plot.

Nagaland deputy chief minister and BLP leader Y. Patton, accompanied by party legislators and advisers, met Union minister of state for home Kiren Rijiju in New Delhi on Monday to discuss about the seriousness of the shocking revelation made by Farmana.

Patton made a fervent appeal to Rijiju for intervention of the ministry of home affairs for a free, fair, thorough and expeditious investigation into the matter to unveil the names of the person who gave the contract and the targeted politician.