The bulldozing down of the Lenin statue in Tripura has in fact set into motion a chain reaction of political vandalism across the country.

BJP leader Subramanium Swamy’s latest remark on the issue came as a jolt.

Swamy, known for his fiery and controversial choice of words, termed Lenin a ‘foreign terrorist’ and questioned why his statue should be displayed in India. Stating that the statue was not broken while being brought down, Swamy also asked Communist leaders to install it at their party headquarters and ‘worship it’.

Notably, Prime Minister Narendra Modi was swift to react on the statue demolition spree in the country, unlike his reactions on other sensitive issues.

The Prime Minister, in a reaction within 24 hours of the statue vandalism spree went viral, said stern action will be taken against those found guilty.

The Prime Minister had also spoken to Union Home Minister Rajnath Singh in this regard and expressed his strong disapproval of such incidents. The Ministry of Home Affairs has taken serious note of such incidents of vandalism following directives from Modi.

Now the ball is in the court of the BJP.

It remains to be seen, how the BJP leadership reacts to Swamy’s statement. 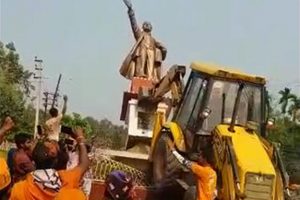 In a first of its kind incident in the country, political vandalism that started in Tripura in the North-east has now spread to several parts of the country.

It all began with the statue of Communist revolutionary Vladimir Ilyich Ulyanov, better known as Lenin, was brought down on Monday by alleged BJP supporters using a JCB celebrating the victory of the saffron party that had won 35 seats in the Assembly elections, results of which were declared last Saturday.

A day later, the saffron brigade brought down another statue of the revolutionary leader in Sabroom, about 50 km from Belonia, in Tripura on Tuesday

In retaliation, a bust of the founder of the Bharatiya Jan Sangh, the predecessor of the ruling BJP, Syama Prasad Mookerjee was blackened and damaged in Kolkata on Wednesday morning, the latest in a series of incidents of vandalism that started with the pulling down of statues of communist leader Lenin in Tripura.

The face was blackened and eyes and ears of the bust were damaged, apparently with a hammer, claimed the Kolkata Police.

Political vandalism moved further down South, when a statue of Tamil icon EVR Ramasamy or Periyar was vandalized in Tamil Nadu.

In Uttar Pradesh, a stutue of B R Ambedkar was damaged at a village in Meerut district.

Covert violence in Tripura: Tripura that witnessed a historic political turnover with the Bharatiya Janata Party (BJP) storming to power from nowhere toppling the 25-year Communist rule is up for more trouble.

Even as Home Minister issued directive to Governor Tathagata Roy and State Director General of Police A K Shukla to ensure peace and tranquillity in the State, covert political vengeance are rampant, according to sources close to Northeast Now.

Several of the CPI-M cadres have reportedly gone missing in Tripura in the aftermath of the election results.

According to informed sources, many cadres have been killed while many have fled from their residences and have taken refuge in some safe locations in remote areas of the State.

Will the Prime Minister and the Home Minister ever be shown the real picture or will such unreported incidents of political  vengeance will wither into thin air after the Biplab Deb government takes charge of the political reins.