Along with several other cities of the nation,Tangla of Udalguri district in Assam was also adjudged with the Swachh City Award for being the fastest moving city in Northeast zone (under population category below one lakh) in Swachh Survekshan 2019 under Swachh Bharat Mission (Urban) by Ministry of Housing and Urban Affairs, Government of India. 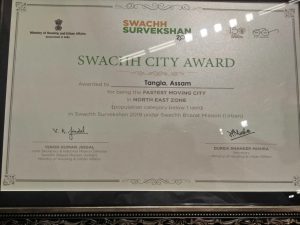 The award giving ceremony was graced as chief guest by President of India, Ram Nath Kovind. The programme was presided over by union minister of state with independent charge in the Ministry of Housing and Urban Affairs, Hardeep Singh Puri.

The event was also attended by secretary, Ministry of Housing and Urban Affairs, Durga Shankar Mishra.

The award carries a certificate of recognition and a statue of Mahatma Gandhi. The news has made the citizens of Tangla and Udalguri district go jubilant.

Chairman of Tangla Municipal Board, Bonjar Daimari has expressed his gratitude and stated that the award has encouraged us and made us committed for working towards keeping the place in record of sanitation and cleanliness.

He also exhorted the people for joining hands and extending support for taking Tangla a step forward in taking the message of Swachh Bharat into a mass movement.

It is pertinent here to mention that the Swachh Survekshan Awards are given by the Union Ministry of Housing and Urban Affairs based on the survey which covered all urban local bodies in the country.

The Survey was the largest such cleanliness survey in the world.