From Sontoli Char to Washington, Assam’s Salma Hussain selected for US peace initiative

Salma Hussain has been working for the poor since the age of 13.

All the way from Sontoli Char in Assam’s Kamrup district to the Andi Leadership Institute (ALI) in Washington DC USA, Salma Hussain’s roadmap was not made in one day.

She belongs to a far flung remote village often ravaged by the vagaries of the Brahmaputra. She lost her father when she was only eight. All credit must go to her mother, Reziya Hussain, a teacher at Sontoli Anchalik Higher Secondary School, who left no stone unturned to give Salma good education and instil a spirit of competitiveness and service in her.

Just a few months ago, while she was readying for her final semester exams at the NERIM Law College Guwahati, she had submitted her application for selection as a participant in the Andi Leadership Institute Programme 2018 for Young Women Peace Builders.

The competition was stiff with only eight young women to be selected from all over the world. The application form itself was like an IAS paper, where one had to respond to objective type questions, write narratives, and provide several reasons for which she should be selected. 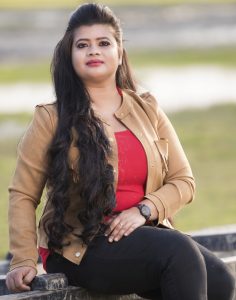 Salma submitted her application form quite meticulously the way she does all her work. A set of telephonic interviews followed, and lo! On Wednesday comes the mail from ALI that she has made it to the Programme. Incidentally, she is the only candidate from India to make it.

Inspiration for the ALI comes from Andi Parhamovich, a young motivated woman leader who was killed in Iraq in 2007 while working for the National Democratic Institute.

The Andi Foundation was established in her honour in 2008 and offers financial assistance to young women who desire to work in the fields of politics, communications, and humanitarian work-areas to which Andi was particularly committed during her life and career.

The Andi Leadership Institute for Young Women (ALI) is working to build on this legacy, bringing diverse women together in an effort to bridge cultural divides and transform conflict through leadership training-similar to what Andi aspired to do through her work in Iraq.

The ultimate goal of the Institute is to produce the next generation of female peacebuilders and activists who will carry on Andi’s legacy through their work in their respective countries. Under this programme, Salma Hussain of Assam will undergo training from August 5 to18, 2018 in Washington, D.C.

She is also likely to visit a few other places and meet important human rights workers to gather ideas for implementing her dream project of adopting a village in Assam and make it a model abode of peace. The Stars of North East (SoNE), of which she is a member, has promised her all support in achieving this noble dream.

While Salma is not concerned about awards and honours, they have been chasing her in recent years. In early 2016, she received the “Youth Leadership” & “TAN Youth Icon 2016” awards given by The Assam News. In the same year, she was the only one to be selected from the entire North East India for the prestigious summer internship with National Human Rights Commission (NHRC) in Delhi. In 2018, she got the “Youth Peace Award 2017-18” given by the National Foundation of India at a function held at India Habitant Centre, New Delhi.

In November 2017, Salma was invited by ICFAI University in Agartala, Tripura to address the National Conference on “Rights of the Elderly Persons.” Addressing the audience, she had said, “Elders are not so much in need of food or money, which anyway could be made available to them. What they need most is affection, and we must supply this to them in abundance.”

A senior bureaucrat who was in the audience was moved to tears. At the end of the deliberation, he came to Salma and proclaimed, “You are India’s Malala.” His words were prophetic, Salma is on the same track that propelled Malala to the international arena of action.