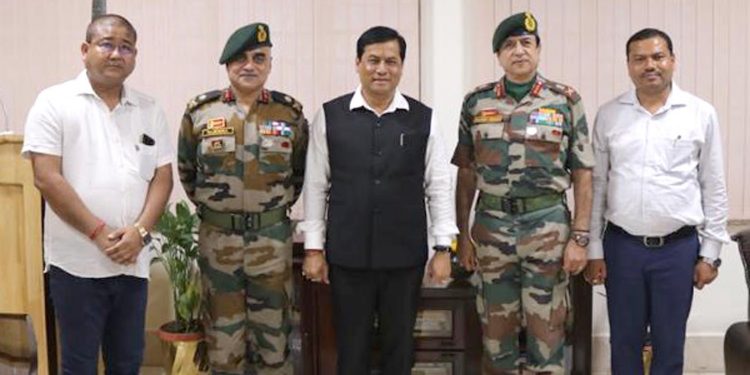 Assam chief minister Sarbananda Sonowal along with the GOCs of 3 Corps and 2nd Mountain Division at Dinjan Army Camp in Dibrugarh district on October 5, 2019. Image by UB Photos

Sonowal held discussions with the top army officials there to take stock of the security scenario of upper and south Assam areas.

Taking part in the meeting, GOC 3 Corps Lt Gen Rajeev Sirohi informed the chief minister that Army was looking after all aspects of security in a large area of upper and south Assam with the help of police and intelligence agencies.

He also apprised that activities of all extremist outfits could be brought under control due to strengthening of security apparatus in the remote areas of Arunachal Pradesh’s Tirap and Changlang districts bordering Assam.

Moreover, the Lt Gen of 3 Corps shared information about the already apprehended terrorists and the recovered caches of arms and ammunition.

GOC of 2 Mountain Division Major General Rajendra Sachdev apprised the chief minister about plans being mooted by the division to control flood and erosion in the areas surrounding Dinjan Cantonment and the neighbouring villages.

Detailed project report was being prepared with the help of the Water Resources Department towards this end, he informed.