We do not believe that the NRC is going to be an error- free document, says Assam BJP chief Ranjit Dass 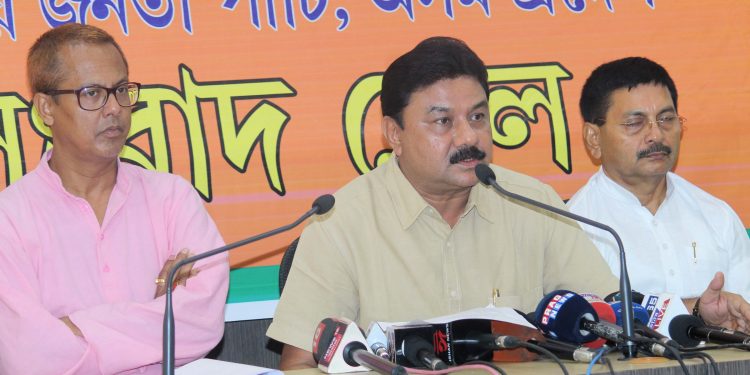 Although Assam chief minister Sarbananda Sonowal termed the final NRC as a historical document, state BJP president Ranjit Kumar Dass on Monday said the party does not believe that the document is going to be error-free.

The final NRC is going to be published on August 31.

Addressing a press conference here Dass said the party is not happy the way the NRC is being updated.

“We do not believe that the NRC is going to be an error- free document,” he said.

“NRC coordinator Prateek Hajela has been working as per his whims and fancies and this is the reason why we are getting an NRC full of names of illegal foreigners and with exclusion of names of genuine Indian citizens,” said Dass.

On August 15 this year, Assam chief minister Sonowal said the NRC will be a historical document, which will neither include names of foreigners nor will it leave the names of even a single genuine India citizen.

“There are names of families of martyrs of Assam movement who were excluded from the NRC. There are suspected foreigners who were involved by the NRC authorities in the update exercise. We are told that there is no counter verification of documents submitted by people for inclusion of their names,” Dass said.

The state BJP chief further said that the party has asked all its 40 lakh members to stand by all the genuine Indian citizens whose names might get excluded from the NRC.

He further added that the party would also demand for bringing legislation and amendment through the Assembly and Parliament if even as single genuine Indian is left out of the NRC.

He said that the government was barred by the Supreme Court to interfere in the process of NRC updation in 2017.

“We felt that there is a need to reverification and hence approached the apex court. However, our demand for reverification was not accepted by the court,” Dass said.

The BJP president appealed the BJP workers as well as the people of Assam not to spread any rumour and approach the Foreigners’ Tribunal if someone’s name is excluded from the NRC.

The statement of the BJP president clearly brings to the fore the differences of opinions between the government and the party, particularly over the NRC.

The Assam government had undertaken the mammoth exercise of updating the NRC in 2013 and has spent over Rs. 1200 crore over the last six years.