SDF party and CM Chamling trying to spread misinformation and hatred in the society just for 'vote bank' politics: SIBLAC 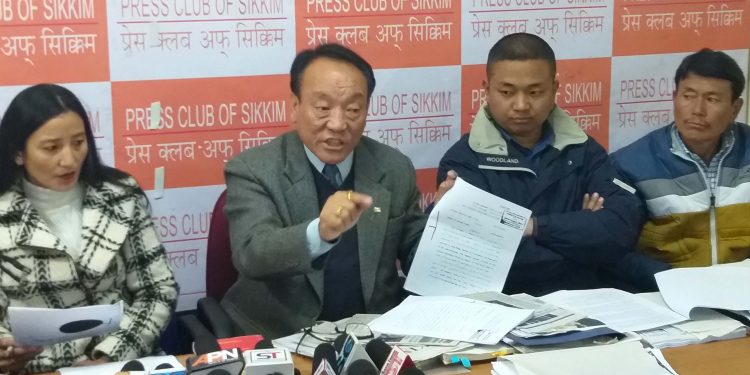 The Sikkim Bhutia Lepcha Apex Committee (SIBLAC) convenor Tseten Tashi has strongly condemned the statement of Sikkim chief minister Pawan Chamling against SIBLAC which has voiced against reservation of Limboo-Tamang seats in the state Assembly.

Tashi asserted that the Sikkim CM should speak with proper evidence in support of his statement.

He alleged that the ruling Sikkim Democratic Front (SDF) party and the CM have been trying to spread misinformation and hatred in the society just for ‘vote bank’ politics.

Addressing a press conference here on Saturday, Tashi condemned the statement of the CM on SIBLAC convener and two MLAs of Sikkim Krantikari Morcha who met union home minister Rajnath Singh on August 8, 2018 in New Delhi and submitted a memorandum not to reserve seats for Limboo and Tamang of Sikkim.

Tashi said, “The CM should give statement with evidence. He should not make attempt to divide the Sikkimese society.”

He stated that the ruling party has been circulating a post on the issue with a picture and distributing leaflets and sticking posters on the same in West and South districts.

The SIBLAC convener urged the police department to take a sue motto case and act against distribution of such leaflets and sticking posters, and said “otherwise anything can happen”.

SIBLAC has also given 15-day ultimatum to remove all the posters and stop distribution of the same in West and South districts.

Tashi clarified that the statement of the CM about the meeting with union home minister on August 8 last year was totally false and “no such meeting” was held on that day.

He also informed that the picture circulated by the ruling party was of the meeting of the union home minister with the SIBLAC convener and SKM MLAs was of September 26, 2016.

He stated that it was the meeting of Bhutia Lepcha Protection Force and BL MLAs with the union home minister and a memorandum of BLPF was also submitted during the meeting.

Tashi informed that a social media worker of SDF party, Baraf Namgyal, has also posted about the meeting and the memorandum in the social media after four days of the meeting on September 30.

The SIBLAC convener thanked Namgyal for posting the same in the social media and further expressed that it was a matter of great concern that leaking of important documents of the home ministry within four days of the meeting as it was a threat to the national security.

He strongly condemned and criticised the Sikkim CM for repeatedly giving false statement on the meeting of August 8, 2018 which had never happened.

“SDF party is in the government and to accuse a small organisation like SIBLAC for obstructing LT seats was very sadden and it also shows that the CM is not capable of holding his chair; so he should resign immediately,” Tashi said.

He asserted that no Bhutia-Lepcha organisation has ever written against LT seats and the CM and the ruling party should give evidence in support of their statement.

“If the CM can produce evidence in support of his statement then I will shut down SIBLAC immediately and would also apologise to the CM but if he has no any evidence then the CM should apologise to the people of Sikkim for giving false statement,” Tashi said.

Saying that the Sikkim CM has made irresponsible statement just for vote bank politics and to create misunderstanding among the people of Sikkim, Tashi said, “I am not anti-Nepali and if anyone can prove me anti-Nepali then I may be shot in daylight at MG Marg.”