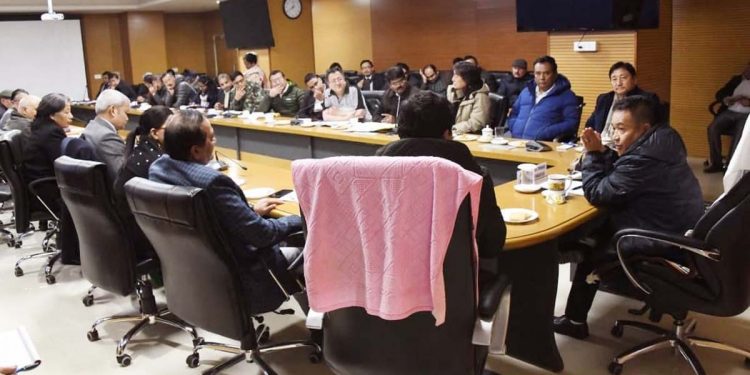 Sikkim CM Tamang on Saturday had a discussion on the issue of traffic snarls in Gangtok and its solutions.

He chaired a meeting regarding the traffic issue at the conference hall of New Tashiling Secretariat.

The meeting was also attended by the Cabinet ministers, chief secretary, director general of police, heads of the departments concerned, government agencies, representatives of civil societies and the chamber of commerce.

Speaking at the meeting, the Sikkim CM reiterated the commitment of the state government towards solving the rising traffic problem in the state capital.

He stated that without bold and concrete measures, the problem would continue to remain unsolved.

Tamang took note of all the possible solutions that are being considered and explored by the departments concerned and the government agencies.

He said any project that is solution-oriented should be immediately worked upon.

The CM said the problems, being faced by the general public, are being taken up as a top priority by the state government and stringent measures are being considered and will be formulated soon to bring relief to the common people.

The CM took note of all the possible alternate routes that are being proposed for decongesting the roads in the capital and also suggested opting for one-way routes.

He also directed the departments concerned and agencies to carry out public sensitisation drives and drills before implementing major changes to be brought in the vehicular movement in the capital.

He also proposed the creation of tourist entry permit systems so that public visits to the state capital can be brought down and the congestion on the roads reduced.

Further, he pitched the idea of a carpooling system for all government officials during peak tourist seasons so as to lessen the vehicular burden on the roads.

He also suggested setting up of a committee immediately to work towards solving the crisis of traffic congestion in the state capital.

Chief secretary SC Gupta stressed on change in habits, infrastructural development, and proper traffic management as the possible interventions for mitigation of traffic congestion in the state capital.

He advised the parents of school children to stop using individual vehicles and send their children to school buses.

Gupta further suggested creating a system whereby parents, who are sending their children to schools on private vehicles, will be levied parking fees to be collected by police for a temporary period.

The chief secretary also suggested shifting the timing of garbage collection by GMC trucks to late evening for easing traffic woes in the capital.

He further said developing Ranka as a sub-city would also help in mitigating traffic issues with the relocation of general service stores in the said area.

Gupta outlined the importance of infrastructure development and traffic management for a paradigm shift in a public convenience.