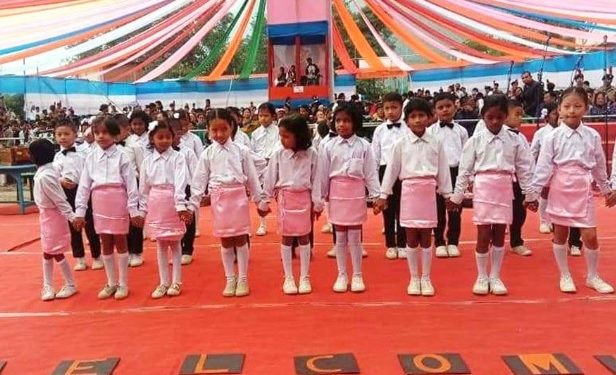 The Jorethang Senior Secondary School of Sikkim observed its golden jubilee celebrations in a grand and befitting manner at the school playground on Thursday and Friday.

Transport minister Sanjit Kharel attended the event as the chief guest alongside Zoom-Salghari MLA Sunita Gazmer who was present as the special guest on the occasion.

Others who attended the programme were Jorethang SDM R B Bhandari, principal Archana Gurung alongside HODs and officials from various departments and representatives from in and around Jorethang.

Addressing the gathering Sanjit Kharel extended his greetings to the school committee and students for hosting and celebrating 50 years of its establishment.

Terming the occasion a momentous one, minister Kharel applauded the efforts of the teaching and non-teaching staff and the students for successfully upholding the grandeur of the school through a two-day long celebration.

In addition, he described the last 50 years as vibrant, productive and fruitful years for the school and expressed his deep satisfaction over the unprecedented growth of educational establishment and contributed much of its success to its principal both former and present, its teachers and the students who attain invaluable knowledge through education.

Similarly, the minister spoke about the past achievements of school, both academically and in co-curricular sphere, and further encouraged the students and youth of the constituency to tap maximum opportunities to hone their talents and thus emerge successful in all their endeavours.

The programme also saw the school and SMC representatives felicitating land donor D R Subba, a former staff at Jorethang SSS for donating his land for the purpose of construction of the school playground.

The programme saw felicitations of former staff, school heads, principal and teachers of the school for their invaluable contribution towards the development of the school.

SMC chairman Biren Rai presented the school report while students of various schools showcased their talents in the form of cultural song and dance performances.

The first day of the golden jubilee celebrations had the presence of state education and law minister Kunga Nima Lepcha as the chief guest accompanied by Soreng-Chakung MLA Aditya Golay and Rhenock MLA Bishnu Kumar Khatiwara.