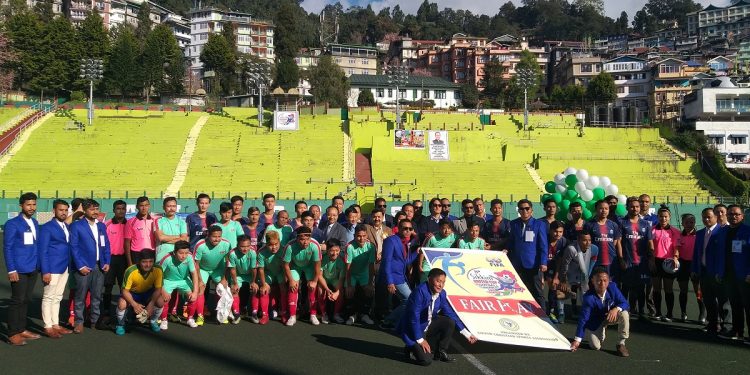 Sikkim United Cup 2019, an Inter Church Football Tournament, was kicked off at Paljor Stadium in Gangtok on Thursday.

The eighth edition of Inter-Church Football Tournament is being organized by Sikkim Christian Sports Association (SCSA) on the theme ‘Play for Glory’.

The inaugural match was played between Agape Christian Fellowship, Majhitar and Bethlehem Fellowship, Gangtok, in which the former outplayed latter 5-2.

Bijendra Rai of Agape Christian Fellowship adjudged as the Man of the Match.

The inaugural function has also witnessed the presentation by popular Christian singers and dance groups.

A total of 29 teams from all four districts of Sikkim and one team each from Kalimpong and Darjeeling have participated in the tournament.

The tournament is an annual event of Sikkim Christian Sports Association since its establishment in year 2012.

Speaking to media persons, SCCA chief coordinator, Suman Rai mentioned main objective of the tournament is to provide a bigger platform and exposure to skillful and talented footballers in different corners of the State.

He informed that the tournament has been successful in providing exposure to many talented footballers of different churches and now they have been playing for different professional clubs in and outside the State.

He stated that the tournament has also aimed to further strengthening the bond and brotherhood between different churches.

The tournament carries the cash prize of Rs 1.5 lakhs to the winner and Rs 50,000 to runners-up.

The final match of the tournament is scheduled to be played on November 30.