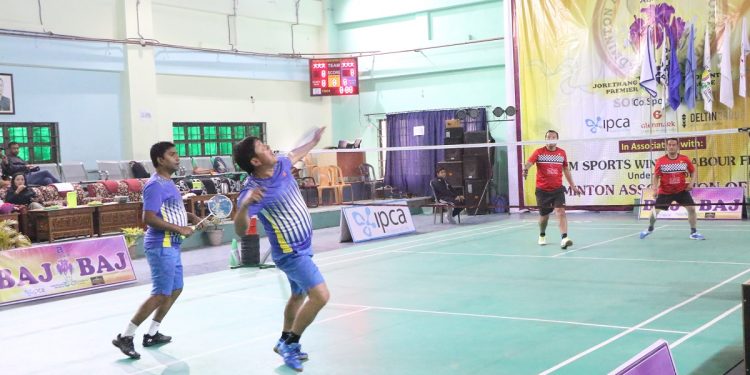 The second edition of Jorethang Premier Badminton League (JPBL) 2020 started in a grand manner at Jorethang in South Sikkim on Saturday.

Agriculture and horticulture minister, Lok Nath Sharma has declared the tournament open during the inaugural function of JPBL 2.

The second edition of JPBL has six teams in the fray for the champion’s trophy.

The tournament carries the cash prizes of Rs 2.5 lakhs for the winners and Rs 1.5 lakhs for runners-up along with trophies.

In his inaugural address, agriculture and horticulture minister, Lok Nath Sharma, who was present as the chief guest, congratulated the organizing committee for organizing the premier badminton league to bring the professionalism in the sports.

He further appreciated the participation of owners and players of different teams in the league to promote professional sports.

The minister expressed that the support of the State Government and said the chief minister shows its priority towards the development of games and sports.

He added that the State Government has also been working to promote sportspersons in the national and international level.

On the same, he encouraged shuttlers to continue with their game to reach the higher levels in their sports career.

He also urged sports lovers and people of the State to support and encourage local sportspersons.

Earlier, in his welcome address, BAJ president Jigmey Namgyal thanked the State Government for extending its full support in organizing the second edition of the JPBL in a grand manner.

He also thanked owners of teams, sponsors and other individuals for supporting the league.

The inaugural function has also witnessed the oath taking ceremony for the participating players and cultural presentations.

A total of 66 players, 11 players in each team, have been participating in this second edition of the JPBL.

The inaugural function was followed by commencement of matches in the badminton league.

Speaking to media persons, BAJ president, Namgyal expressed that the grand success of the first edition of JPBL motivated to came up with the second edition of the league.

He thanked the State Government for extending tremendous support to the second edition of the league in a grander and bigger manner.

He said, “Badminton players have already been seeing JPBL as a bigger platform to them to take up badminton professionally and the league has become more competitive this time and such format of the tournament has also been helping in the growth of badminton in Sikkim.”

Namgyal expressed that there was need of such format of the tournament in other sports as well to promote professionalism in sports and to provide better platform to local players.

David Warriors co-owner, Jacob Khaling thanked the organizing committee for creating a platform for local players to showcase their talent and to encourage them to take up sports as a career.

He expressed that such event would take players towards professionalism and motivate them to reach in the national and international levels.

“We are happy and excited to be a part of JPBL 2 and we want to encourage youths of Sikkim through our participation,” he said.

Khaling stated that sport was a priority sector of SKM government and the CM to encourage youths in the productive and healthy path through sports.

“We want to encourage local sportspersons of Sikkim to take up their respective sports professionally and to shine their names in the national and international levels,” he said.

He mentioned that that the government has been working in infrastructure development, organizing competitions and extending other supports and assistances to sportspersons of Sikkim to make healthy and productive youths.

A Poklok Warriors player, Amol Rai, who is the highest paid shuttler of JPBL 2 with an amount of Rs 20,800, expressed that such format of the tournament was very beneficial for players to provide them bigger platform and to motivate young players to take up badminton as a career.

“I would give my best for the team and we are hopeful for the better performance from the entire team members,” he expressed.