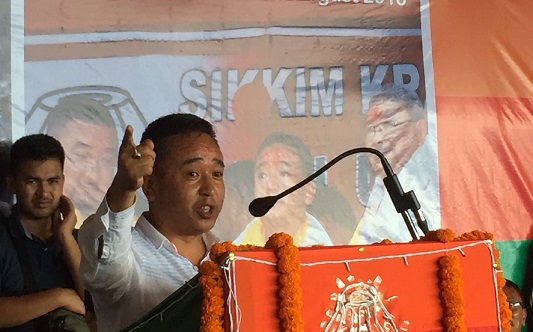 He was speaking on the occasion of the inauguration of SKM zonal party office at Lall Bazaar under Arithang constituency. He urged party workers to continue with their works to liberate the people from all bondages at the grassroots.

“I was put into jail in a bid to kill our movement but I am really happy and satisfied that our movement gets stronger even in my absence. Now immense love and support of the people give me new energy to work more for the people,” he said.

“Due to political pressure, victimization and political transfer, the government employees have been extending support to SKM,” he said. “Morcha would never misuse vigilance department and police to take revenge but will work as per the law,” he added.

Golay said his party does not depend on a single person but believes in teamwork as a result of which all conspiracies of the ruling party against SKM proved futile.

“I am happy to see the lakhs of PS Golay have been born in the state to take our Kranti ahead,” he said adding that no power will now stop SKM to form the government in 2019.

On the occasion, SKM raised a sum of Rs 23,240 from its workers and supporters during the programme as relief support for flood victims in Kerala.