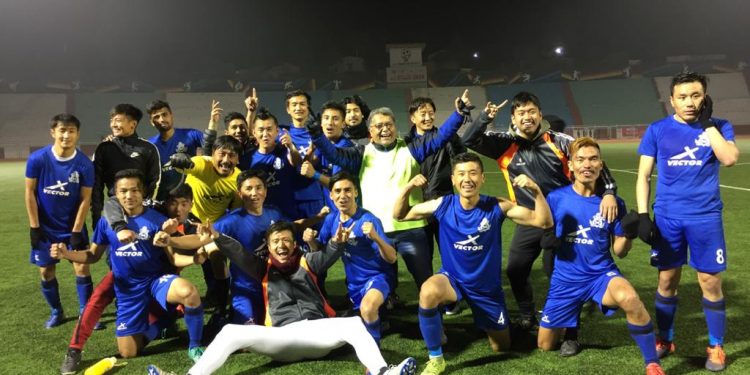 A brace by the substitute, Milan Chettri in the extra-time of the match helped Sikkim to enter into the finals of the 9th T Ao North East Football Championship played at IG Stadium in Kohima, Nagaland.

Sikkim has entered into the finals of this prestigious tournament for the third time but has not been able to lift the champion’s trophy so far.

In the nail-biting second semi-final match played under floodlights on Monday evening, Sikkim has outplayed Arunachal Pradesh 3-1 in the 30 minutes extra-time of the match to secure its berth in the finals of the tournament.

Sikkim will take on Mizoram in the final match of the tournament on Tuesday.

Sikkim has topped the group-B in the league round with 7 points to secure it berth in the semi-final round of the tournament.

Being a very crucial match, Sikkim maintained a constant pressure on the opponent with an attacking game from the start of the match but did not find the net to score any goal.

The first half of the match ended goalless draw.

Sikkim continued with its attacking game again in the second half and Kintup Lachungpa finally gave the breakthrough to Sikkim with his goal in the 59th minute.

However, Sikkim team could not able to maintain the lead for long when Tapi Hakhe scored the equalizer for Arunachal Pradesh in the 78th minute to end the full time of the match 1-1 draw.

In 30-minutes extra-time game, desperate to win both teams took each other neck-to-neck with attacks and counter-attacks.

Soon in extra-time game, Sikkim’s substitute player, Milan Chettri scored a goal for the team in the 100th minute and soon sealed 3-1 victory for Sikkim with his brace in the 112th minute.

He stated that every player of the team has played upto the expectation and strategy of the team coach, Mayal Dok Lepcha.

“We have entered into the finals of the tournament for the third time and players are in high spirit and confidence to take the champion’s trophy to the home this time,” he expressed.