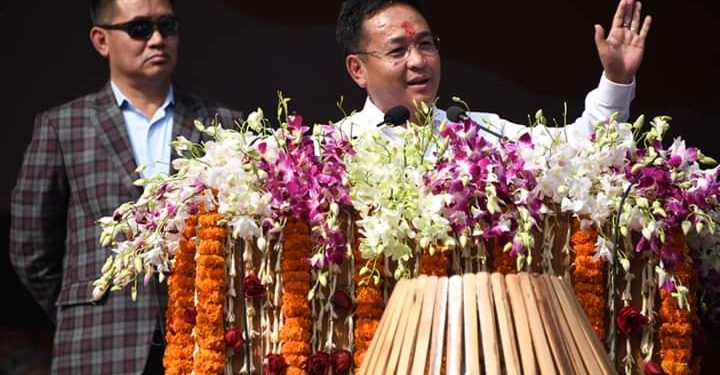 Sikkim Krantikari Morcha (SKM) president and state chief minister P S Golay on Tuesday said the election manifesto of SKM party would reflect in this budget of the State.

The budget will be placed next month in the Assembly.

“But SKM government would do all works in these five years of its governance which SDF failed to do in its 25 years of the government,” Golay asserted.

He was addressing the huge gathering of the people on the occasion of eighth foundation day of SKM party at Rangpo playground in East Sikkim on Tuesday.

Speaking at the function, Golay said the formation of SKM party on February 4 in 2013 was not only an important day for the SKM but for the entire ‘parivartan’ loving people of the State who faced lots of difficulties in the earlier government.

“I had faced lots of personal attacks and allegations by the earlier government but I was always committed to fulfill the desire of the people to liberate them from 25 years old autocratic government of SDF,” he expressed.

Golay mentioned that SKM had won 10 seats in 2014 election within one year of the party formation.

He thanked SKM MLAs K N Lepcha and Sonam Lama for standing still with the party during its difficult time after seven SKM MLAs had joined SDF after 2014 election.

He also thanked the party workers and supporters for always standing with the party since its formation by facing lots of difficulties and oppression to bring the party into the government in 2019.

He expressed that the real democracy has been restored in the State only after the formation of SKM government.

While alleging that SDF government had totally destructed the State and damages were irreparable, the chief minister stated that SKM government has already been working on the rebuilding process of the State.

He urged the people to support the government to make Sikkim the model State in the country.