All India Congress Committee (AICC) secretary in-charge of Sikkim, Pradyot Bikram Manikya Debbarma on Monday said the party has been committed for the safeguard of the original spirit of the Article 371 F provided to Sikkim by the Constitution of India. 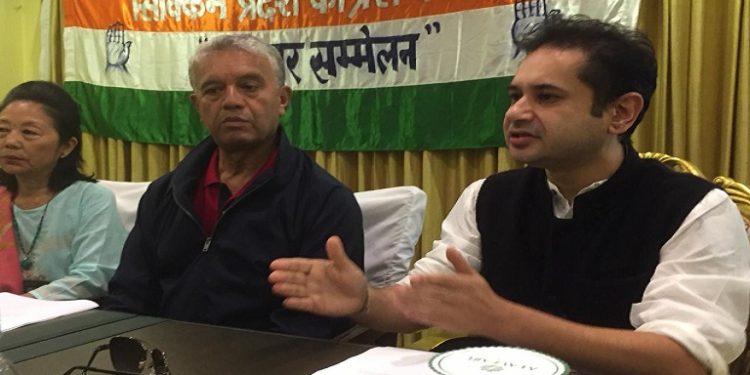 All India Congress Committee (AICC) secretary in-charge of Sikkim, Pradyot Bikram Manikya Debbarma on Monday said the party has been committed for the safeguard of the original spirit of the Article 371 F provided to Sikkim by the Constitution of India.

He further said Congress will always remain dedicated to protect and fight for the rights and privileges of Sikkimese people.

Debbarma is in Sikkim after being appointed as the secretary in-charge of Sikkim by the AICC. During his visit, he discussed with leaders, workers and office bearers of the frontal organisation of Sikkim Pradesh Congress Committee on various issues pertaining to Sikkim.

Addressing a press conference here Debbarma said that the Congress Party had provided the constitutional guarantee in the form of the Article 371 F of the Constitution to protect the interests of Sikkim and its people. On the same, he asserted that the Congress party would always remain committed to protecting and safeguarding the special status provided by the constitutional provision and would not support its dilution in any manner.

Debbarma said the Congress party fully supports the reservation of seats for the Sikkimese Nepali in the State Assembly.

The party is committed to raise this issue in the Parliament and restoring political right of Sikkimese Nepali which it understands is essential for strengthening the social fabric of Sikkimese society and maintaining communal harmony which has prevailed here for generations. He stated that the ongoing influx in Sikkim would dilute the interest of Sikkimese people.

“We will now speak on the local issues of Sikkim continuously in the state and in the Parliament and reach out to the people in the grassroots. We want to make our position stronger as we have willingness to work for the people of Sikkim,” he added.

He informed that SPCC would reopen all its district offices. He also urged youths and people from different walks of life from Sikkim to come forward if they want to work in the interest of Sikkim and its people.