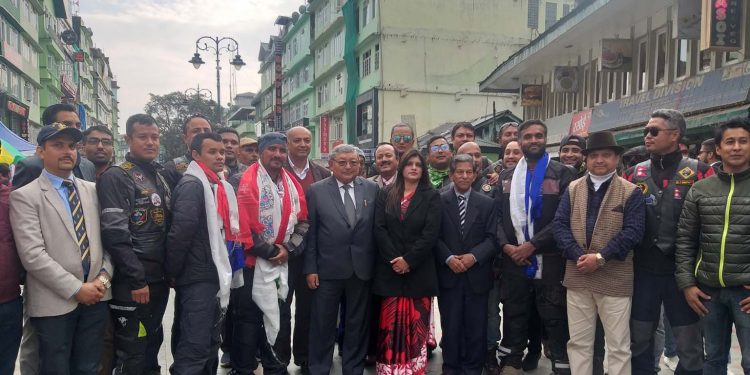 The members of the biker's gang during the felicitation ceremony. Image: Northeast Now

A five-member bike rally on cancer awareness, which began in Mumbai on February 3, reached Gangtok on Wednesday afternoon.

The rally was organised by Nepali Gorkha Sewa Samiti- a Mumbai-based organisation was flagged off from Chembur by local MLA Prakash Phaterpekar.

The bikers are a part of Hamro Chhahari- a project of Nepali Gorkha Sewa Samiti that provides accommodation and guidance to cancer patients and the families who are financially weak.

The assistance is specially provided to patients who visit Mumbai for cancer treatment from Sikkim, Nepal, and Bhutan and the organisation has two ashrams at Kurla and Chembur.

The rally covered several cities of Goa, Karnataka, Andhra Pradesh, Telangana, Odisha, West Bengal and Sikkim and shared a message on cancer awareness and its prevention.

The team was given a warm reception by the people of Gangtok as they completed the rally and the felicitation programme was graced by Sikkim education minister Kunga Nima Lepcha among others.

“It is not a joy or adventurous ride for a social cause and others should take inspiration from this initiative,” he said.

“The works and initiative taken by Hamro Chhahari are really applauding and others should take inspiration from them,” he added.

“Cancer cases in Sikkim are on the rise and such an awareness initiative was the need of the hour,” he added.