It was a proud moment for Sadam Senior Secondary School of Gangtok in Sikkim after its pipe band bagged the second prize at the national level inter-school band competition held in New Delhi on Monday.

The team was led by vice principal of the school, L B Pradhan along with school management committee member P B Gurung. 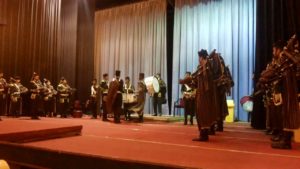 The Sikkim State Project Director of Sarva Shiksha Abhiyan, Bhim Thatal was also present at the competition held at National Bal Bhawan in the national capital as an invitee of the Human Resource Development (HRD) Ministry.

HRD principal secretary G P Upadhyaya has also congratulated the team and wished them all success in their future endeavour.

The Sadam school pipe band was formed last May and has managed to win laurels of many within this short duration.

The rare moment came during the opening day function of Red Panda Winter Carnival at Paljor Stadium on January 8 this year. The band had the opportunity to perform in front of music wizard A R Rahman, who has recently been appointed as brand ambassador of Sikkim. The music maestro showered all praises on the young school band. He has also decided to include the Sadam school band in his upcoming music project.