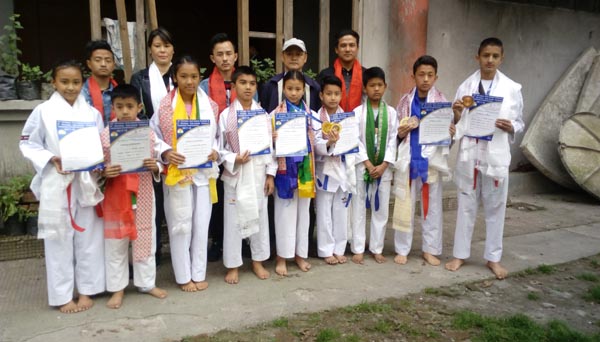 The four-day championship was organized by Taekwondo Federation of India (TFI) from March 22-25 in Pune.

Likewise, Anushka Subba and Yangzey Tamang won a gold medal each in Girls Team Poomsae and Gokarna Chettri won a bronze medal in U-44 kg Kyorugi.

In a small function held at White Hall in Gangtok this evening, SATA felicitated the medal winners and coaches for winning laurels for the State.

Team coach, Suman Tamang mentioned that although most of team members were fresher’s they gave an outstanding performance in the national championship. “All these young martial artists are promising and have full potential to do well in the national and international levels if they go with same form and performances,” he said.

Likewise, team manager, Karma Ongmu Bhutia appreciated the performance by the State team members. She also urged the young team members to work hard to do well in upcoming championships.