HoD, Cardiology is “preventing other doctors and paramedics to perform their legitimate duties", alleges NEIGRIHMS director 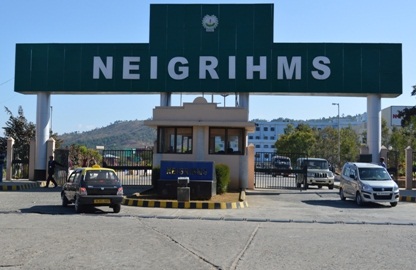 The NEIGRIHMS authority on Wednesday clarified that the service of the HoD, Cardiology of the medical institute has been shut down due to the latter’s alleged non-cooperation with the administration in regard to make treatment of poor cardiology patients affordable.

According to media reports, the service of the HoD, Cardiology of NEIGRIHMS at Shillong has been shut down since Tuesday following difference between the director, Dr DM Thappa and the HoD of the Cardiology department, Dr Animesh Mishra over purchase of stents and pacemaker.

As per the Ministry of Health and Family Welfare Government of India regulations, the autonomous medical institutions should make treatment of poor cardiology patients affordable.

Through a press release, the PRO of NEIGRIHMS on Wednesday said: “There are two complaints from PMO Office to Ministry of Health and Family Welfare forwarded to NEIGRIHMS, some time before regarding high price  Cardiology patients have to pay to get treatment in NEIGRIHMS due to high cost price of stents, which the patients purchase from some local vendors.”

Following the complaints, a committee was formed by the Director, NEIGRIHMS to get the requirements from various departments so that the stents/pacemakers, costly drugs and disposable could be made available through revolving fund or Amrit pharmacy.

“But due to lack of co-operation by the HoD Cardiology, the list could not be finalised,” the PRO said.

An advisory by the Union Ministry of Health and Family Welfare was displayed in the OPD to inform the patients to get the costly items from Amrit pharmacy rather than from outside vendors at a higher cost.

The Amrit pharmacy also assured of making the costly items available to patients of the hospital within 48 hours, if not available in the store.

The PRO stated that the joint secretary of the Health and Family Welfare, Gayatri Mishra, recently forwarded a letter from a Parliamentary Committee wherein it was pointed out that if in autonomous institutions, patients buy costly items from private vendors paying a high price and “if administration of these autonomous institutions is unable to curtail the price, then the administration is a part of the illegal practice”.

“Administration of NEIGRIHMS has been for past two years seeking co-operation from HoD Cardiology to solve the problem of patients by forwarding the precise and up to date requirements to the administration/ the committee, but unfortunately the department preferred to make patients purchase costly stents and pacemakers from a vendor (Sanjo Medical) from outside the hospital at a very high cost,” the press release said.

The vendor (Sanjo Medical) “in connivance of the HoD Cardiology” used to get stents in the morning to the Cath Lab and sell to the patients on the advice of the cardiologists on the day of the procedure at a very high cost, despite the capping of rates by the Ministry, the release said.

It has been alleged that the NEIGRIHMS director during his hospital round on April 30, 2019 at 9.30 am found the vendor carrying four bags full of stents/pacemakers heading towards Cath Lab and when intercepted by the security and brought to the notice of the director, the matter was referred to the chief security officer and the chief vigilance officers at NEIGRIHMS.

The security and vigilance officers took serious cognisance of “illegal trade in the hospital and cheating of the poor patients by the vendor with the help of HOD cardiology, and ceased the supplies after the procedure was over (in the interest of patients), despite of a noisy scene created by the HoD, Cardiology”, the PRO stated.

“HoD Cardiology, Dr. Animesh Mishra feeling himself trapped tried to exploit the patient care services by denying treatment to the poor patients since yesterday and is inciting the patients against administration of the institution,” it added.

The director of NEIGRIHMS has appealed to the public to co-operate so that the “menace of illegal practices are curbed once for all”.

The director has also warned the HoD, Cardiology that he shall be personally responsible for any causality in the department as he is “preventing other doctors and paramedics to perform their legitimate duties”.

“Administration is taking all measures to streamline services in Cardiology department,” the release further stated.