All the state police forces of the north-eastern states are observing Police Commendation Day on Monday.

Police Commemoration Day is observed on October 21 every year to mark the martyrdom of policemen killed in Ladakh in 1959 and to pay tribute to all other police personnel killed on duty during the year.

On this day in 1959, 20 Indian soldiers were attacked by the Chinese troops in Ladakh, during which ten were killed and seven were imprisoned and others managed to escape. 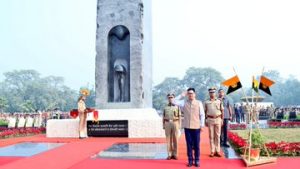 Union sports minister Kiren Rijiju joined the nation in paying tributes to those martyrs on Monday.

He paid glowing tributes to those martyred on this day in the year 1959 and all those who laid down their lives in the line of duty.

Early on Monday morning, Rijiju joined other leaders in paying tributes at the memorial in the national capital.

‘Today on Police Commemoration Day, once again salute to all the brave armed police martyrs who sacrificed their lives. They risk their lives every day to protect our society and make it a safe place to live. Salute to police, firefighters and members of our armed forces.’

Meghalaya police took to its official Twitter handle to mark the occasion:

‘On Police Commemoration Day, we remember and Honor all those brave officers, who lost their lives in the line of duty.

Who kept the faith and fought the fight; The glory theirs, the duty ours!

Assam Police also remembered its brave soldiers on this day.

‘On #PoliceCommemorationDay, we honour the valour of our brave Martyrs, who gave the supreme sacrifice in service of the Nation.

Their courage and dedication will remain immortalised in our memory.

Charaideo Police also saluted all its comrades on the day.

“A picture is worth a thousand words”