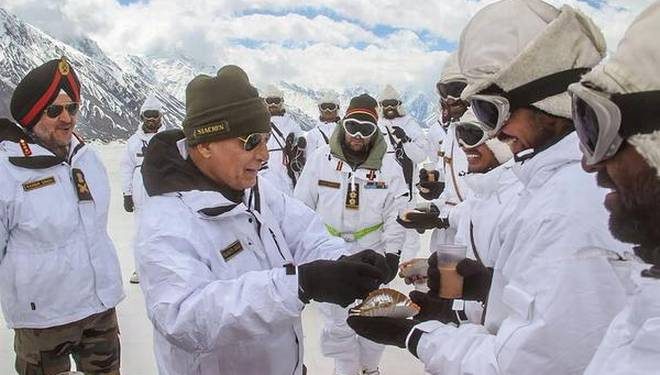 Union defence minister Rajnath Singh in a letter written to the wife of an Army soldier from Manipur applauding his grit in protecting the country’s sovereignty in the inhospitable terrains.

The Army soldier from Manipur Havildar Vanlalsanglian is posted in Siachen.

In June this year, Singh had visited the Siachen Glacier, the world’s highest battlefield.

He then interacted with the Army officers and soldiers there, including Havildar Vanlalsanglian.

During his interactions there, he had praised the ‘tenacious resolve and unstinting commitment’ of the soldiers deployed in the harsh region.

In his letter addressed to Vanlalsanglian’s wife Mercy Nguliyangkim of Saikwat village in Manipur’s Churachandpur district, Rajnath Singh wrote, “Your husband Vanlalsanglian whom I had the proud privilege to meet is doing a yeoman service to the nation by guarding our borders in the most inhospitable area.”

“The country is proud of our soldiers. I extend my gratitude to you for contribution of your husband for the service towards the nation,” he added.

The Siachen Glacier, which once used to be a demilitarized zone, came under the strategic control of India in 1984 following ‘Operation Meghdoot’.

The operation had been launched by the Indian armed forces, under the leadership of then Prime Minister Indira Gandhi, after Pakistan allowed a Japanese team to undertake an expedition to a strategic peak in the glacier.

The peak directly overlooked Aksai Chin, an area that is under dispute between India and China.

Since the boundaries between India and Pakistan in the Siachen region were not properly defined in the Karachi Agreement of 1949, Pakistan used to send tourist expeditions to the glacier in the 70s and the 80s.

The Indian Army also allowed expeditions to Siachen in the late 70s. However, the glacier was put beyond the civilians’ limits after it was militarized in 1984.