Longleng was on eastern side of Chindwin around 1 am on Tuesday and later in afternoon at around 4:30 pm Longleng was close to Mandalay 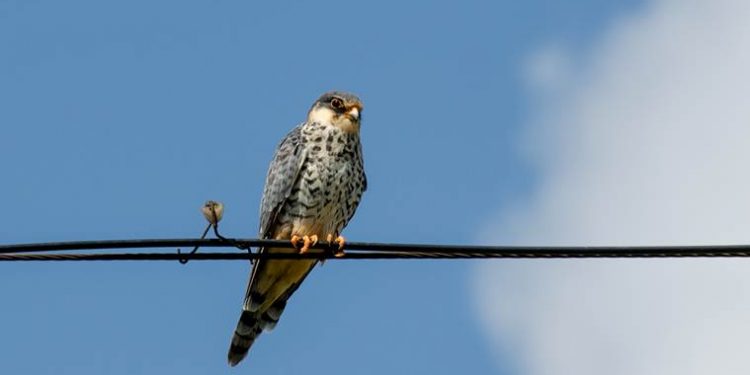 The scientists who are studying the migratory routes of the Amur falcon ‘Longleng’ which has returned to India on May 2, on her way to her breeding area in northern china and eastern Mongolia, on Tuesday confirmed that the bird has reached Myanmar.

Longleng crossed into Myanmar from Manipur on Monday, said a scientist of Wildlife Institute of India (WII) when contacted.

The amur falcon Longleng was on the eastern side of Chindwin around 1 am on Tuesday.

Later in the afternoon at around 4:30 pm, Longleng was close to Mandalay, the second largest city and the last royal capital of Myanmar.

Earlier, the scientists lauded the efforts of entire community under Yaongyimchen, Alayong and Sanglu in Nagaland for their commitment in creating community bio-diversity area and giving asylum to Amur falcon and other species.

Amur falcon is one of the least known birds among the 69 falcon species known from India, according to experts.

It also acknowledged the measures undertaken by the Government of Nagaland, particularly the wildlife wing of Nagaland Forest Department to create awareness among the Nagas to ensure safe passage to falcons as they pass through the State.

WII scientists in a report on radio tagged Amur falcon ‘Longleng’ stated that the community has been giving their best effort towards the bio-diversity conservation initiatives and this is a huge contribution to the world in the area of protecting many endangered species.

On the successful and safe return of Longleng in India, the report said, Longleng’s arrival in India now marks the sixth successful crossing of the Arabian Sea and is expected to arrive in Nagaland once again.

Longleng named after Nagaland’s district, was radio-tagged in October 2016, arrived at Gadchiroli forest reserve in eastern Maharashtra covering around 4800 km after she started her return journey from Somalia on April 29, it said.

Otherwise Longleng fly down to southern Karnataka close to Bangaluru and or Mysore during its previous migratory route and head back along the east coast to northeast India.

However, interestingly Longleng this time headed straight across Maharashtra to southern Odisha possibly waiting the cyclone Fani to pass.

The bird which was radio-tagged to study the migration route of these long-distance migratory birds and to create more awareness among the local population has reached Manipur on Sunday and roosted in Churachandpur district before it flew to Myanmar.

The Amur falcons that spend their summers at their breeding grounds in northern China migrate to their wintering grounds in South Africa. On the way, they stop in north-eastern states and leave the region in November after having enough food for their non-stop flight.