A satellite-tagged Amur falcon which flew non-stop flights to reach Somalia in Africa in November 2018, has returned to India on the way to her breeding area in northern China, a Wildlife Institute of India (WII) scientist R Suresh Kumar said. 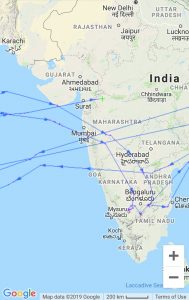 Scientist Kumar of WII who is monitoring the small migratory bird and her route said that the bird flew straight over to Surat (in Maharashtra) after Arabian sea in the return journey. Kumar said the bird is presently at a place called Rayagada in Odisha.

Rayagada is said to be a district of meadows, forests, water falls and terraced valleys in the cyclone Fani hit Odisha.

Longleng, a female Amur falcon named after Nagaland’s district was radio-tagged in October 2016, arrived in Somalia on April 17 from her wintering grounds in South Africa and she started her return journey to India on April 29, according to the scientist.

The bird was radio-tagged as part of the studying the flight route of these long-distance migratory birds and other environmental patterns along the route.

The smart small raptor, depending upon the weather condition of the region is likely to fly across Manipur and Nagaland in northeast (along with others) for the onward journey to northern China via Myanmar after passing through Bangladesh, the scientist said.

The Amur falcons spend their summers at their breeding grounds in northern China and and some areas under southeast Russia. They migrate to their wintering grounds in South Africa, from where they start their return journey in April-May, undertaking a yearly journey of about 20,000 km. In between, they stop in India’s north-eastern states.

Mizoram to reopen churches from February