Prohibitory orders under Section 144 CrPC in Guwahati for Dipawali

The office of the Deputy Commissioner of Police in West Police, Guwahati has issued prohibitory orders under Section 144 of CrPC regarding bursting of crackers and use of firework etc in the vicinity of oil pipeline with the West Police District, Guwahati.

An order issued by the in-charge of Deputy Commissioner of Police, West Police District, Guwahati stated that the orders are promulgated keeping in view that such use of fireworks and bursting of crackers within the vicinity of oil pipeline may cause inflammation or fire as huge quantities of highly volatile and inflammable petroleum products are stored in IOC Betkuchi, Hindustan Petroleum, Gorchuk and all the fuel pumps and all the oil pipelines passing through West Police District, Guwahati.

The in-charge Deputy Commissioner of Police also stated in the order that if such acts are allowed, there is every likelihood of imminent danger to the safety and security of the installations and residents residing nearby. 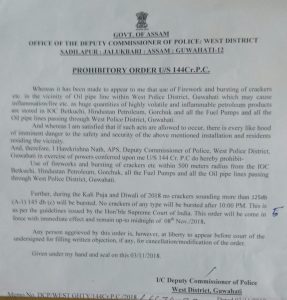 So, the Deputy Commissioner of Police, West Police District, Harekrishna Nath, APS, in exercise of powers conferred upon his under section 144 CrPC prohibited use of fireworks and bursting of crackers etc within 500 metres radius from the IOC Betkuchi, Hindustan Petroleum, Gorchuk, all fuel pumps and all the pipelines passing through West Police District, Guwahati.

The notification further stated that during Kali Puja and Diwali, no fire crackers sounding more than 125 db (A-1) 145 db (c) will be used.

No crackers of any types will also be allowed to be bursted after 10 pm in the night as per guidelines issued by the Supreme Court of India.