Prince Daniel offers financial assistance to an NGO at Hajo 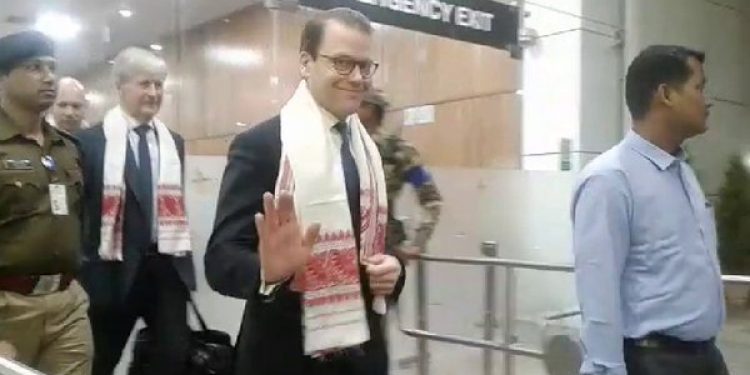 Prince Daniel of Sweden as he arrives in Guwahati. Image credit - Pratidin Time

Prince Daniel of Sweden arrived in Assam on Wednesday with a two-day-long visit.

Prince Daniel, who is the Duke of Västergötland, arrived at Lokpriya Gopinath Bordoloi International (LGBI) Airport in Guwahati on Wednesday along with 22 foreign delegates.

According to media reports, the purpose of the Assam tour by Prince Daniel was to visit an underdeveloped area at Hajo in Kamrup (Rural) district, 35 km from Guwahati.

The prince, as per reports, has offered financial assistance to a non-governmental organisation (NGO) at Hajo.

The Hajo-based NGO has been working to educate the people of the underdeveloped area at Hajo.

A media report quoted a member of the NGO saying that the royal visit of Prince Daniel of Sweden would bring more attention towards the rural area in the Kamrup (rural) district. The prince’s visit has encouraged them to work harder.

According to information, the prince also visited two schools at Hajo.

A chance meeting with none other than the Prince Daniel of Sweden, who is on his two-day personal visit to India. He visited two schools at Hajo today.

It may be mentioned that Hajo is an ancient pilgrimage centre for the Hindus, Buddhists, and Muslims and this is a unique example of religious harmony.

The small town of Hajo, which is famous in Asia for its bell metal industry, is also the largest producer of silk clothes in Assam.

Forty-five-year old Prince Daniel of Sweden is the husband of Crown Princess Victoria.
Before his marriage to the heir apparent, Prince Daniel was a personal trainer and gym owner and ran a company called Balance Training with three gyms in central Stockholm.