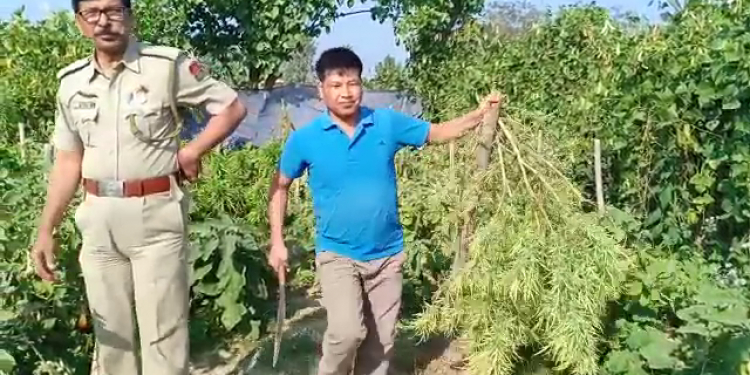 The incident took place within few hours after two youths were arrested red-handed along with banned drugs on Thursday under Kalyanpur Police Station.

Talking to media persons, Sub-Inspector of Kalyanpur Police Station, Swapan Das, who led the anti-drugs operation said, “On the basis of secret information that ganja cultivation is going on in the bank of river Khowai at South Gilatali area, we rushed to the spot and found the information to be true.”

He also said they found around 50 to 60 ganja plants in the unclaimed area in the river bank and after uprooting the marijuana plants, they burnt those using kerosene oil.

Das also informed that the police will continue operation against marijuana plantations and use of banned drugs.

He also hinted that they would intensify their anti-drugs operation in the coming days to make the area drugs-free.

It may be mentioned that in line with the government’s mission to make a “drug-free state”, various security
agencies till September, 2018 seized huge quantities of several drugs valued at Rs 33 crore, said officials.

“In the past six months, different security agencies have seized 45,000 kg of dry cannabis (ganja), 1.70 crore ganja plants, 88,000 bottles of various types of cough syrups, 1.48 lakh habit-forming tablets, 2,626 grams of brown sugar and in Tripura,” an official of the revenue department said in September, 2018.