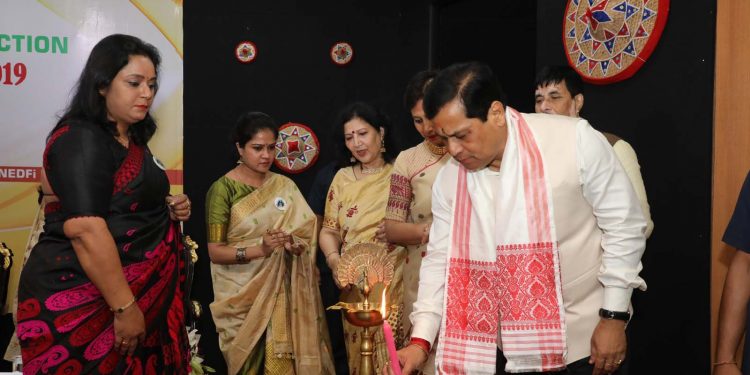 Assam CM Sarbananda Sonowal lighting a ceremonial lamp to mark the inauguration of a function by Prerana - an IAS Officers Wives' Association at NEDFi House in Guwahati on Tuesday.

Sonowal asked Prerana to take a significant role in generating awareness of the flagship schemes launched by Prime Minister Narendra Modi among the people living at the grass root strata of the society.

He released the ‘Aspirations 2018-19’ at a function organised at NEDFi House in Guwahati.

Sonowal said taking into consideration of the expertise and experience of the Prerana, which has been championing the cause of social justice and empowerment, the wives of the IAS officers should play the role of a catalyst to generate massive awareness at every strata of the society.

He further said flagship schemes like Beti Bachao Beti Padao and Ujjwala schemes should be made more meaningful to enable them to reach the target groups and the Prerana must take an important role in this aspect.

He also asked Prerana to take a lead role to spread its good role to every nook and corner of the society so that it can lend capacity building to marginalised sections of the society and the women folk.

From last 3 decades, Prerana is playing an appreciable role in uplifting socio-economic condition of the people through its various initiatives. pic.twitter.com/JM0Vqki5nf

Sonowal also said Prerana by rendering assistance to the deserving persons during normal circumstances and during stress situations can contribute to national development.

Asking Prerana to motivate and empower women folk, Sonowal said that by empowering women, Prerana can contribute to GDP.

He also urged upon the office bearers of Prerana to undertake reach out programmes and interact with the students of colleges and universities to motivate them to face circumstances of life upfront.

Sonowal asked Prerana to use its services to work against superstition, drug menace etc. He also assured all help from the government to Prerana to help it carry forward its mission and passion.